We look back at the blockbuster career of the rock solid action star to discuss how the People’s Champion truly became the most electrifying man in entertainment.

If you go by box office numbers and pop culture ubiquity, moviegoers have definitely smelled what Dwayne (formerly “The Rock”) Johnson has been cooking since he made his transition from the squared circle of the WWE to the silver screen. But aside from a handful of Certified Fresh films like Jumanji: Welcome to the Jungle, Disney’s Moana, and a couple of the Fast and Furious installments, Johnson’s filmography as a leading man is littered with critical duds. How did this ever happen to The Most Electrifying Man in Entertainment?

Our latest episode dives into the blockbuster career of the charismatic action star who, time and again, has proven himself The People’s Champion by consistently earning higher Audience Scores than Tomatometers on his films, whether it’s the kaiju-sized action of Rampage (72% Audience Score vs. 51% Tomatometer), the international intrigue of Red Notice (92% vs. 36%), or even the family-friendly wholesomeness of The Game Plan (69% vs. 29%). Hell, even the critically savaged Baywatch (17%) earned a 63% Audience Score. We’re here to figure out what exactly is going on and possibly celebrate a few underrated gems. 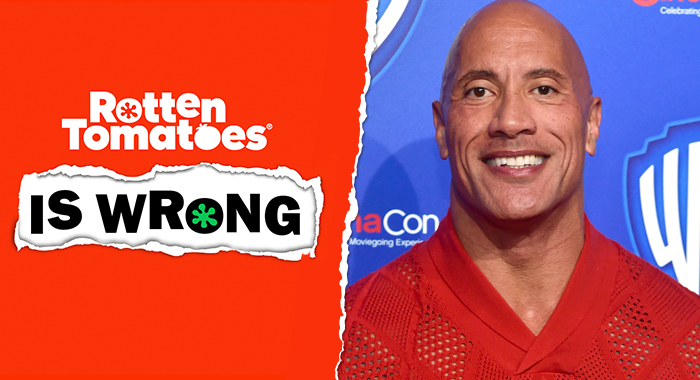 Regular co-hosts Jacqueline Coley and Mark Ellis are joined this week by returning guest Jay Washington, who is not only a stand-up comedian, actor, and podcast host, but also a former pro wrestler, which makes him especially qualified to talk about Dwayne Johnson’s exploits. Jay goes to bat for a couple of his favorites, namely Pain & Gain and Be Cool, while Jacqueline sings the praises of The Rundown, which holds a special place in her heart due to a very personal story, and Mark has thoughts on the aforementioned Red Notice, which he believes is criminally underrated.