The star of Netflix's You dives deep to tell us why her 1999 smart-shark creature feature is more than just "Jaws Lite." 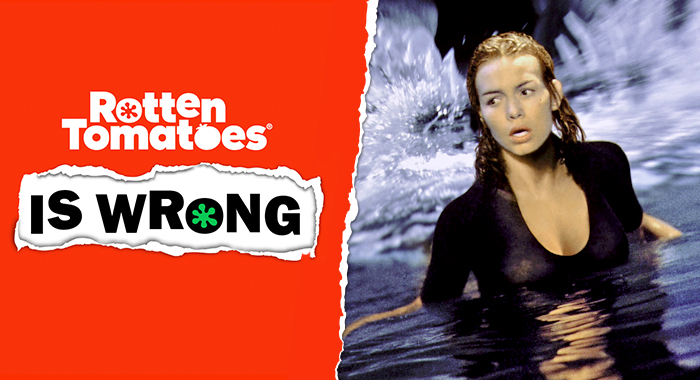 In the canon of notable shark movies, 1999’s Deep Blue Sea resides somewhere between Jaws and Sharknado, scary enough to provide some good jolts and campy enough to inspire a few genuine laughs. In some cases – see: the now-infamous sudden demise of Samuel L. Jackson’s Russell Franklin – you got both in the same scene. Opening just two weeks after The Blair Witch Project and one week ahead of The Sixth Sense, Deep Blue Sea nevertheless managed to attract a sizable audience and carve out a space for itself during a summer that included Star Wars: Episode I – The Phantom Menace, The Mummy, and American Pie.

Despite its healthy box office take (it grossed over $165 million worldwide), the film just barely missed the Fresh threshold at 59% on the Tomatometer, and though it spawned a pair of sequels and sparked a retrospective reassessment as one of the greatest shark movies of all time, it maintains a surprisingly low Audience Score of 39%. It also marked the beginning of director Renny Harlin’s descent into shlocky, poorly reviewed clunkers after he showed promise with action fare like Die Hard 2 and Cliffhanger.

While fans of the film acknowledge its goofier B-movie trappings, they’re keen to point out its focus on its characters – LL Cool J’s resident chef Preacher is a highlight – and its effective slow build to the carnage that unfolds in the latter half of the film. There’s clearly a divide between those who feel it isn’t nearly frightening or funny enough and those who feel it accomplishes both with surprising efficiency, and that ultimately may come down to an “agree to disagree” stalemate. But for those who enjoy the gory, campy thrills of Deep Blue Sea, there is no redemption to be found in the Tomatometer or Audience Score.

One person who finds this a particularly egregious injustice admittedly has a dog – or a shark – in the fight: Saffron Burrows, who stars in Deep Blue Sea as the ill-fated Dr. Susan McCallister. Burrows can currently be seen in the hit Netflix series You, whose third season premiered a little over a month ago, and she’s also preparing to make her directorial debut on a film called Everything I Ever Wanted to Tell My Daughter About Men. But this week, she dives deep with co-hosts Mark Ellis and Jacqueline Coley talk about favorite scenes and reminisce about her experience making the film.

Aside from breaking down what, in her opinion, makes Deep Blue Sea such an effective thriller, Burrows has a wealth of fun stories from the set to share. She explains how dangerous the mechanical sharks used in the film actually were and describes how her seasick co-stars Jackson and Thomas Jane fell asleep during a scene on a lifeboat. Burrows also explains how her character was originally supposed to survive but rewritten to perish after test-screening audiences called out for her death (ouch!), and recounts the time Jackson essentially saved her from drowning when Harlin thought she was just turning in a killer performance.