Henry William French himself saddles up to argue why this Western sequel full of young stars, sweeping vistas, and epic music deserves to be remembered in a blaze of glory. 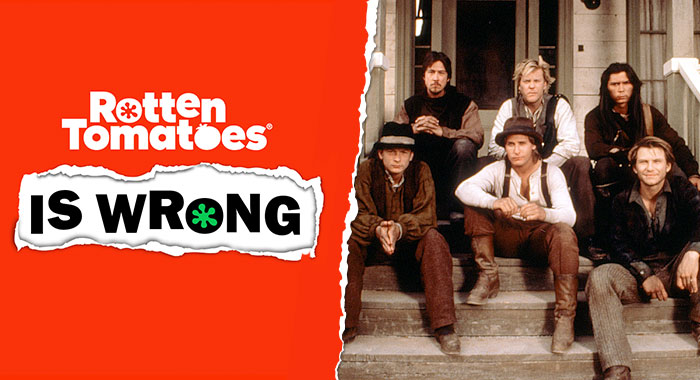 Back in 1988, a slick, stylish, star-powered Western helped reignite interest in the genre by making one key decision: Instead of the grizzled old cowboys folks were used to seeing, Young Guns pulled together some of Hollywood’s hottest young twentysomethings and set them loose to swagger all over the screen. It was a frontier shoot-’em-up for the MTV generation, and audiences ate it up, making it a box office success. So of course they had to make a sequel.

Young Guns II brought back Emilio Estevez’s Billy the Kid, Kiefer Sutherland’s “Doc” Scurlock, and Lou Diamond Phillips’s Jose Chavez y Chavez, added a few fresh faces (Christian Slater, William Peterson, Balthazar Getty, James Coburn, Alan Ruck), and framed everything as a flashback from the perspective of Brushy Bill Roberts, the real-life Texas man who claimed to be Billy the Kid back in 1948. The result was just as much a financial success as the first film, but critics collectively preferred to drink turpentine and piss on a brush fire.

Fans of the sequel, of course, feel otherwise. Not only is Estevez at his mischievous best, giggling his trademark giggle and uttering unforgettable one-liners like “Yoo-hoo! I’ll make you famous,” but the film is gorgeously shot and full of memorable scenes. And we haven’t even mentioned the music yet: Alan Silvestri’s sweeping score is appropriately evocative and romantic and triumphant all at once, and Jon Bon Jovi’s chart-topping “Blaze of Glory” is a bona fide gunslinger’s anthem.

Now, it’s not every episode of “Rotten Tomatoes Is Wrong” that Jacqueline and Mark agree, but both of them happen to be ride-or-die fans of Young Guns II, so this week’s guest is an extra-special treat. The man who personally chose to defend the film is none other than Alan Ruck, who plays
Henry William French, aka (albeit very briefly) “Buckshot George.”

Depending on your age, you may know Ruck as Ferris Beuller’s sad-sack BFF Cameron, womanizing mayoral staffer Stuart Bondek on the sitcom Spin City, or the loopy Connor Roy from HBO’s hugely successful Succession, which is currently in the middle of its third season. Ruck not only discusses his favorite moments in the film and why it struck such a chord with audiences, but also describes how Lou Diamond Phillips narrowly escaped death on set, remembers Viggo Mortensen as a young horse whisperer, and offers more great stories from behind the scenes.