"Rotten Tomatoes Is Wrong" About... Star Wars: Episode III – Revenge of the Sith

Is Revenge of the Sith the dark and moody savior of the Prequel Trilogy, as critics declared it was? Or, um... Nooooooooooooooo!? We’re swinging our lightsabers in the direction of Episode III. 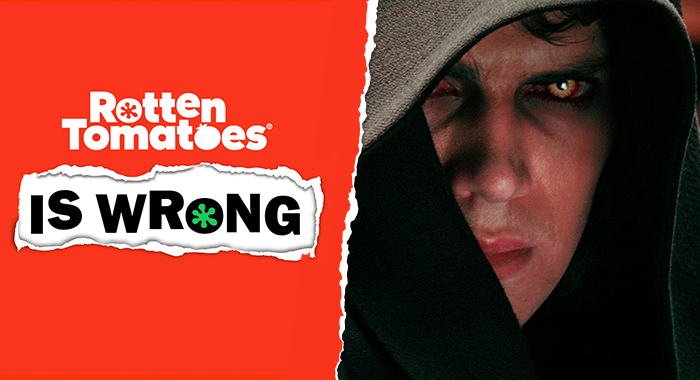 When Star Wars: Episode III – Revenge of the Sith arrived in theaters in 2005, it did so on a wave of mixed expectations. On the one hand, fans were frothing to finally witness Vader’s full turn to the Dark Side, something they had been fantasizing about – in some cases – for decades. It had to be awesome, right? On the other hand, those same fans had seen the two previous films in the saga and, well, learned that sometimes it was helpful to hope for the best – but expect a poorly acted CGI-stuffed snooze-fest instead.

According to the critics, though, George Lucas delivered, and their praise has pushed the movie’s Tomatometer score to a Certified Fresh 80%, making it not just the best-reviewed film in the Prequel Trilogy, but among the best-reviewed Star Wars movies ever.

So, Revenge of the Sith has the high ground – but does it deserve it?

That’s what we’re asking in the latest episode of our podcast, Rotten Tomatoes Is Wrong, the final in a series of three special episodes in which hosts Jacqueline Coley and Mark Ellis revisited the Star Wars Prequels to ask – two decades and a divisive set of sequels later – do Episodes I-III actually hold up? And are they even, perhaps, better than we ever gave them credit for? Joining them this week is Dorina Arellano, one third of YouTube’s Whirl Girls, movie and pop-culture fanatic, and co-host of Impolite Truths. Was she as seduced by George Lucas’s foray into the Dark Side as critics were at the time? Tune in to find out.