"Rotten Tomatoes Is Wrong" About... How the Grinch Stole Christmas

Charming as an eel or just the thing to grow your heart a few sizes every holiday season? We're tackling Ron Howard's garish – or utterly charming? – take on Dr. Seuss in our latest podcast episode. 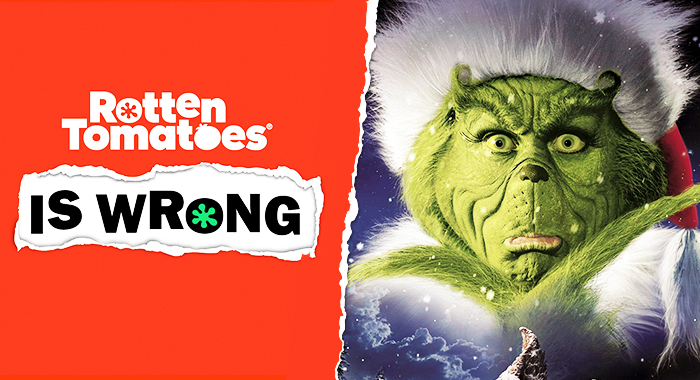 For his now-iconic turn as the Grinch in Ron Howard’s 2000 adaptation of Dr. Seuss’s beloved book, it’s said that Jim Carrey had to spend eight hours a day in the makeup chair and underwent training from a CIA agent to help him cope with the extended discomfort. On multiple occasions, the actor almost quit the production, so torturous was the process of becoming the Christmas-hating, Whoville-terrorizing green meanie. But, in the end, it was all worth it… right?

That depends where you stand. Much like a certain Internet-dividing dress (it’s definitely blue), How the Grinch Stole Christmas polarized critics and audiences upon its release. The story of the outcast Grinch (Carrey) – tossed aside by the residents of Whoville only to grow up as an increasingly “mean one” until little Cindy Lou Who (Taylor Momsen) enters his life and eventually enlargens his heart – was catnip to many who praised its incredible production design and Carrey’s whirlwind, bats—t performance. But for others there was something hollow at the center of this gaudy Christmas bauble, which stretched Seuss’s charming sliver of a story – so beautifully captured in Chuck Jones’ 1966 Christmas special – to a 104-minute ode to the commercialism it was supposed to be criticizing.

In this week’s episode of our podcast, Rotten Tomatoes Is Wrong (A Podcast from Rotten Tomatoes), we’re unwrapping this modern Christmas favorite and asking: Is How the Grinch Stole Christmas really as bad as that Rotten 49% Tomatometer score? Or is this a smarter – and more hilariously cynical – film than many give it credit for? Joining hosts Jacqueline Coley (team Grinch!) and Mark Ellis (team Critics) is Winston A. Marshall, a.k.a. host, actor, and comedian The Swaggy Blerd. The trio talks Carrey’s masterful performance, the true villains of this Christmas world, behind-the-scenes drama (there was plenty), and why this Grinch might hit home with certain groups more than others.