"Rotten Tomatoes Is Wrong" About... Vampire In Brooklyn

When Eddie met Wes, it was a match made in movie hell, but 25 years later some say this Craven-Murphy mega flop is a bloody good time ready for its moment in the sun. (OK, moonlight, just to be safe.) 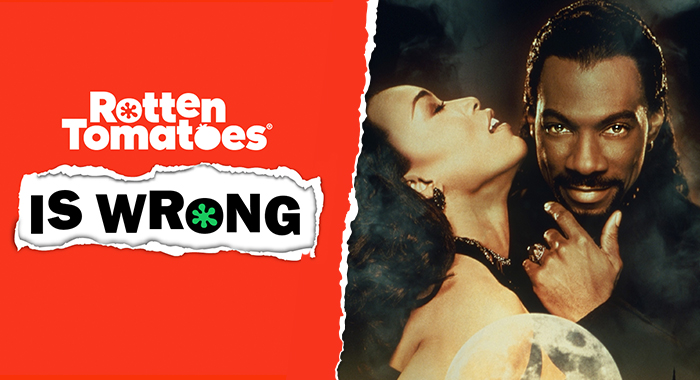 The wig did it.

At least that’s what Eddie Murphy said about the box office and critical flop that was his big-budget team up with horror master Wes Craven, Vampire In Brooklyn. Both men were about to have arguably the biggest success of their careers in 1996 – Murphy with The Nutty Professor, Craven with Scream – but first they had to make a stop in Rottenville with the 1995 flick critics slammed as a not-funny, not-scary, totally misguided waste of both their talents. And no, Eddie wasn’t wrong: the permed mane atop vampire Maximillian’s head did not help matters one bit.

Both director and star have given insights into what might have gone wrong over the years: Murphy was allegedly difficult to work with; Craven wasn’t sure what kind of film he was making. But over those same years the movie has also earned something of a reputation as a cult classic. Not “classic” in the sense of being “good” per se, but classic in the sense of being a total romp with an under-appreciated sense of the bizarre, a killer score, and some serious chemistry between Murphy and Angela Bassett as an NYPD detective caught up in a bloodsucker’s quest.

Look closely, and there are glimmers of Craven’s keen sense of the horror-comedy mix, and Murphy’s natural-born charisma. (Don’t look to closely, though: those prosthetics do not hold up.)

Twenty-five years after it flew into theaters like some plasma-seeking, be-permed bat, Vampire In Brooklyn‘s reputation as a disaster for its estimable cast and crew is only matched by its reputation as a bloody good time. Which makes us wonder: Is a 12% Tomatometer fair for a film that’s this much fun? That’s what we’re asking in our latest episode of Rotten Tomatoes Is Wrong (A Podcast from Rotten Tomatoes). Biting in with hosts Jacqueline Coley and Mark Ellis this week is stand-up comedian, actor, and former pro-wrestler Jay Washington, who is playing no-holds-barred as we look back at a movie whose star and director may want to forget, but which so many have come to fondly remember.

Be sure to check in every Thursday for a new episode of Rotten Tomatoes Is Wrong (A Podcast From Rotten Tomatoes). Each week, hosts Jacqueline and Mark and guests go deep and settle the score on some of the most beloved – and despised – movies and TV shows ever made, directly taking on the statement we hear from so many fans: “Rotten Tomatoes is wrong.”