"Rotten Tomatoes Is Wrong" About... Sister Act 2: Back in the Habit

Alert every one of your AOL buddies, '90s kids: We're going deep on the movie critics lashed but which so many think is sinfully good in the most joyful-joyful episode of our podcast yet. 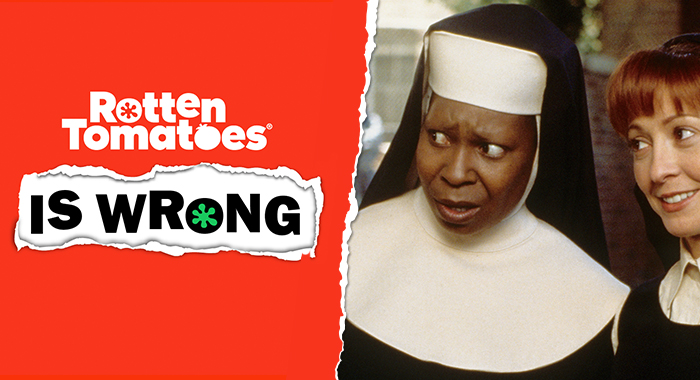 For many, Sister Act 2: Back In the Habit is a movie with pretty much everything: An incredible lead star in Whoopi Goldberg, rousing musical numbers to spare, next-gen talent destined for greatness (hello, Lauryn Hill!), and – with its triumph-over-adversity and pursue-your-dreams themes – so many feels.

And yet at the time of its release, the critics weren’t feeling it. The beloved comedy sequel, which came out just a year and a half after the super-successful original, was largely dismissed as a retread not just of that first film, but of the “inspirational teacher inspires inner-city kids” genre more generally. It has a current Tomatometer score of just 17%, and it’s been much lower than that in the past.

That score has not gone unnoticed. Not by Buzzfeed Australia, not by the latest guest on our new podcast, and not by a slew of ’90s kids, who have told us in no uncertain terms in comments, Audience reviews, and at bars when we tell them where we work, that when it comes to Sister Act 2, “Rotten Tomatoes Is Wrong.” And so yes, we had to talk about it… and record ourselves as we did.

In the latest ep of our new podcast, Rotten Tomatoes Is Wrong, we’re bowing our heads in deep reflection and asking why this film that so many Millennials worship so adoringly was deemed by critics to be such a sin against cinema. Hosts Jacqueline Coley and Mark Ellis are joined by Maikiko James – Director of Programs at Women In Film and movie lover whose favorite film ever just happens to be Sister Act 2 – to sing the praises of the movie’s soaring musical numbers, its deep bench of future superstars, and get into the Whoopi of it all. Crucially, they’ll also ask whether Back In the Habit – a landmark for representation in mainstream American film at the time – ever stood a chance, given who was doing the reviewing for America’s newspapers, radio stations, and networks when it was released.

Be sure to check in every Thursday for a new episode of Rotten Tomatoes Is Wrong (A Podcast From Rotten Tomatoes). Each week, hosts Jacqueline and Mark and guests go deep and settle the score on some of the most beloved – and despised – movies and TV shows ever made, directly taking on the statement we hear from so many fans: “Rotten Tomatoes is wrong.”