To many, it is perfect; to others, problematic. But is this ensemble Christmas rom-com deserving of the yearly tar-and-feathering it gets from its haters? We're breaking it down in our latest podcast. 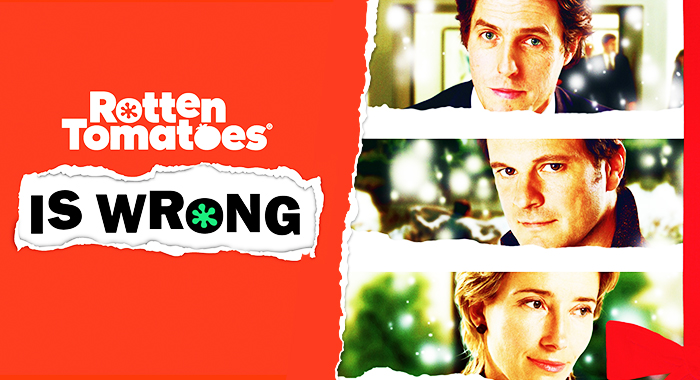 It’s become something of a yearly ritual among certain cynical types to bash Richard Curtis’s wildly popular rom-com Love Actually, the granddaddy of the “Tons of Interconnected People Falling In Love” genre. It’s schmaltzy, they complain, and Andrew Lincoln’s sign-communicating would-be lover is actually a stalker. And what’s with all the fat-shaming!?

And yet… Love Actually remains, as we stated above, wildly popular – a modern Christmas classic full of moments many won’t forget (the Joni Mitchell scene breaks us every time); which airs on a loop most Decembers; has been adapted into a stage show; and, in 2017, spawned a popular reunion for Britain’s Red Nose Day. So can it really be that bad, actually?

That’s what we’re asking in the latest episode of our podcast Rotten Tomatoes Is Wrong (A Podcast from Rotten Tomatoes). And in the spirit of this sprawling film with its mammoth cast, we’re going all out with not one but two guests joining regular hosts Jacqueline Coley and Mark Ellis: film critic Scott Mantz and our producer Lucy Bruckner.

Will they decide Love Actually is perfect… to them? Or will it all end in tears… in the bedroom… where the kids won’t see them break? Tune in to find out.