"Rotten Tomatoes Is Wrong" About... Venom

We're chomping into one of the most controversial Tomatometer-Audience Score divides ever: Did critics do this Earthling-symbiote bromance wrong, or was it really just a cinematic turd best left rolling by? 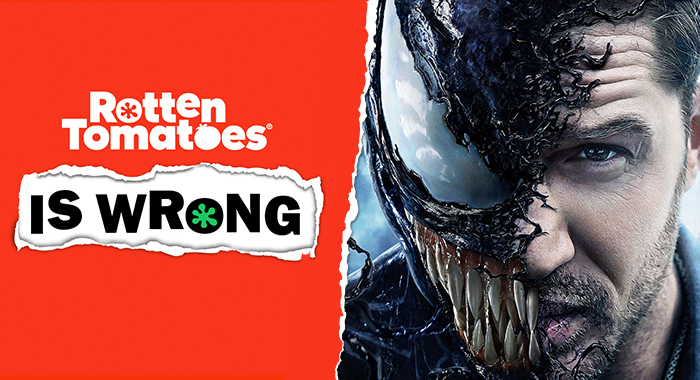 Shakespeare gave us “to be or not to be,” Puzo and Coppola gave us an offer we couldn’t refuse, and the three writers of Venom – yes, three people are credited for this screenplay – gave us “rolling down the street like a turd in the wind.” Your thoughts on that now-iconic, symbiote-issued simile likely mirror your reaction to the film in which it’s spoken. Did you, like so many critics, declare Eddie Brock’s solo debut a poorly scripted and misguided mess? Or did you, like so many fans, bow down giddily to your new head-biting Marvel master, thankful for a superhero movie that stood out from the pack by being weird as hell, dark AF, and letting Tom Hardy do all of that?

In the world of Tomatometer-Audience Score divides, director Ruben Fleischer‘s Venom gives us a canyon like few others, with just 30% of critics declaring it Fresh compared with 81% of the Audience. But you don’t need us to tell you the film is beloved: The movie made a whopping $856 million at the global box office and fans are hotly anticipated the Andy Serkis-directed sequel, Venom: Let There Be Carnage, due out next year. (And yes, we’ve heard you in our comments sections and in our DMs and in all those magazine-cut-out stalker-style letters we’ve been receiving: you really, really think the critics got it wrong on this one.)

So, of course, we had to do an episode of our new podcast Rotten Tomatoes Is Wrong devoted to lovable loser alien Venom and his Earthling host Eddie. Joining hosts Jacqueline Coley and Mark Ellis this week is pop-culture commentator and woman-who-would-absolutely-go-to-town-on-a-tank-full-of-live-lobsters, Roxy Striar, who is our official Voice of the People, arguing that Venom not only be Fresh, it should be somewhere in the 90th percentile. Is she right? Is RT wrong? Did lady Venom really need boobs? We’re going deep, so be sure to tune in.