Allllll righty then, comedy fans! We're hunting down every clue and exploring every rhino cavity to solve the biggest case in Jim Carrey's career: Do the Ace Ventura flicks deserve their Rotten splats? 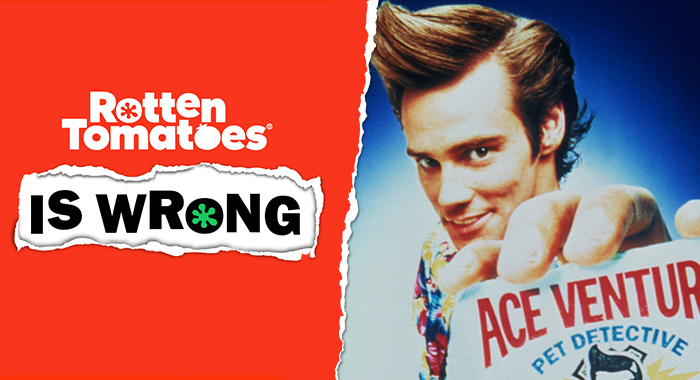 Was Jim Carrey’s 1994 the single best year for a relative newcomer to the big screen ever? Or was it just the single best year for any actor – period? Consider that in this 12-month span, the In Living Color star appeared in three movies that were smash hits at the time and have gone on to become comedy classics: The Mask, Dumb & Dumber, and Ace Ventura: Pet Detective. Each would spawn catchphrases, sequels, and remain in the pop culture conversation almost three decades on, but only one stands out from the otherwise-Fresh pack for earning itself a big green splat on our Tomatometer.

That film is Ave Ventura, which featured arguably Jim Carrey’s most Jim Carrey performance, a fact that split critics almost evenly – the movie is Rotten at 49% – between those who were repelled by his rubber-faced gonzo efforts and those who felt Carrey was the best thing about this sophomoric story of a stolen football mascot and the quest to track it down. (Still, reviews were kinder to the 1994 movie than they were to its sequel, released just a year later: Ace Ventura: When Nature Calls was slapped with a Rotten Tomatometer score of just 25%.)

Were the critics talking out of their… ahem, asses? Or are these widely beloved films genuine loooooosers when we take a clear-eyed look back at them? That’s what we’re asking in the latest episode of our podcast, Rotten Tomatoes Is Wrong (A Podcast from Rotten Tomatoes), in which we tackle two movies for the first time ever: Ace Ventura and its bigger-budget, higher-concept, maybe-funnier(?) sequel. With all that film to tackle, we had to bring in the big guns, and this week joining our hosts Mark Ellis and Jacqueline Coley is stand-up comedian, actor, and director of the new – Fresh! – film, The Opening Act, Steve Byrne. In the ep, they talk about the epic talent of Jim Carrey, the challenge of comedy that doesn’t always age well – yes, we get into the problematic stuff here – and whether comedy sequels are inherently cursed. All in the quest to answer that question we ask every week: Was Rotten Tomatoes wrong? In this case: twice?!