"Rotten Tomatoes Is Wrong" About... Joker

Does the award-winning billion-dollar blockbuster deserve a score more worthy of the title "masterpiece" – which so many fans think it is? We're going back to the circus of October 2019 in our latest podcast. 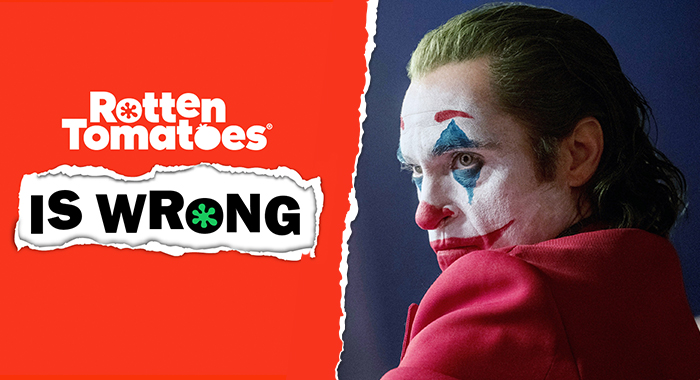 It was the most nominated movie at the 2020 Academy Awards. It won director Todd Phillips the Golden Lion at the 2019 Venice Film Festival. It finally made Joaquin Phoenix an Oscar winner. And it became the first R-rated movie to make more than $1 billion worldwide. In short: Joker was a phenomenon.

So, why is its Tomatometer score just 68%?

The story of that score – which represents the percentage of Tomatometer-approved critics who gave the movie a positive “Fresh” review – is an interesting one. Joker was actually marked Certified Fresh following a first wave of reviews that were largely raves and which catapulted the score well clear of our CF criteria (a steady score above 75% with more than 80 reviews); then, as hundreds more reviews came in, the score plummeted to below 70% and stayed there, meaning we had to revoke its CF status.

Fans were clearly on the side of that first wave, though: Joker has an Audience score of 88% and, well, you know how popular those stairs became.

With Oscar season once more upon us, and almost two years to reflect on what many consider the darkest and most ambitious comic-book movie ever made, we thought we’d dive back into the story of Arthur Fleck, Thomas Wayne, and the failing systems that shaped their very different lives. Is Phillips’ dark vision of Gotham’s premiere villain a masterpiece, one that tapped into the pressing anxieties of our time? Or was it too disturbing, too derivative, and potentially too dangerous? Or does the truth lie somewhere in the murky space between?

Joining hosts Mark Ellis and Jacqueline Coley this week is RB3, a.k.a. Robert Butler III, co-founder of the First Cut YouTube channel, co-host of podcast The Meaning Of, and director. Does RB3 think that Tomatometer score is on the right side of history when it comes to Joker? Tune in to find out.