The most anticipated movie of the last year has split critics down the middle, and wreaked havoc on the Tomatometer. Time to bring out the Lasso of Truth: Is it the open-hearted dose of hope we need or an overstuffed misfire? 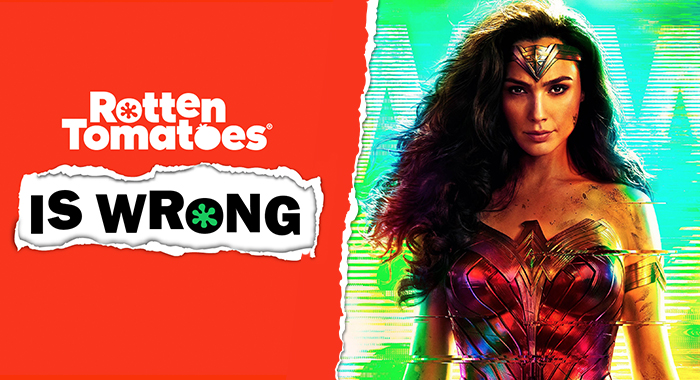 When Wonder Woman 1984 was released on Christmas Day last year, we knew it was going to be a cinematic groundbreaker – it was, after all, the first major Warner Bros. release to debut both in theaters and on streaming service HBO Max simultaneously, a distribution model that will continue for WB films through 2021.

What we didn’t know was that it was also going to be something of a groundbreaker for Rotten Tomatoes: The first movie marked Certified Fresh – at 88% with hundreds of reviews in – to eventually not only lose that certification as hundreds more reviews came in, but drop to a Rotten score of 59%. It was only a toe-dip into green – its score has now stabilized at a Fresh 60% – but it was a fall like none we’d seen before.

So, we had to talk about it, right?

In our latest episode of podcast Rotten Tomatoes Is Wrong, we’re breaking from our formula of looking at movies that have been out for at least a year to address the two-and-a-half-hour, lasso-wielding, flying elephant in the room: the barely-a-month-old Wonder Woman 1984. Is the just Fresh score of 60% spot-on? Should it be even lower? Or should it soar – like a newly-replenished superhero discovering a new aspect of her powers – into the clouds?

Joining our all-powerful podcast hosts Jacqueline Coley and Mark Ellis for this discussion is queen of Collider, Perri Nemiroff. Together, they dig into all the issues on screen – the villains, the “genie rock,” and whether they needed to bring Steve back – as well as what might have been happening behind the camera and whether the movie works better on the big screen than in your living room.