"Rotten Tomatoes Is Wrong" About... Avengers: Age of Ultron

Its Tomatometer score may not be quite so low as the Hulk-calming sun, but the action-packed Avengers sequel still sits somewhere at the back of the MCU pack. Is that where it really belongs? 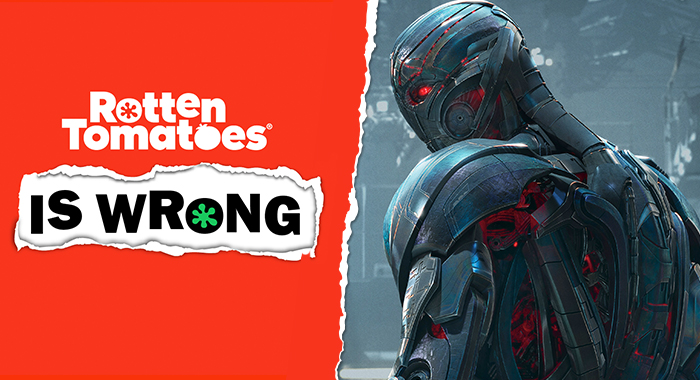 By many estimations, 2015’s Avengers: Age of Ultron is the very definition of a “success”: It’s Certified Fresh on the Tomatometer at 76%, with an Audience Score of 83%, and took in $1.4 billion at the global box office. In many ways it is the key to the current Marvel Cinematic Universe, setting up conflicts and dramas that would define the MCU’s most recent phase, and brilliantly planting seeds that would bloom into the franchise’s most memorable moments for several years after its release.

And yet: Despite those positive scores, the buffo box office, and its legacy, Ultron is ranked just 20th of the 23 MCU Movies, according to the Tomatometer, and if you ask many fans is among the weakest efforts to be produced by Marvel Studios since Iron Man revolutionized superhero cinema. With more action, more quips, and more characters than the original, some see signs of sequilitis, while others see signs of creative tension between director Joss Whedon and the studio manifesting in baffling detours like Thor’s infamous vision-in-the-bath.

In the five years since its release, despite a few hearty defenses – including from some at Rotten Tomatoes – Ultron has slowly developed a reputation as the Avengers film we don’t really talk about, a bloated misfire between the masterful original and the Russos’ epic two-parter, Infinity War and Endgame.

Fair? That’s what we’re asking in the latest episode of our podcast, Rotten Tomatoes Is Wrong (A Podcast from Rotten Tomatoes), where host Jacqueline Coley and Mark Ellis go deep on the good (James Spader), the bad (Cap’s random quips), the divisive (yep, Thor in that bath again), and whether the film deserves its (relatively) bad rap. Joining them this week is comic book obsessive, pop-culture commentator, producer, and host Coy Jandreau, whose take on this Sokovia-destroying hit may surprise you.