"Rotten Tomatoes Is Wrong" About... The Greatest Showman

Look out, 'cos here it comes: An epic debate about the high notes and the low notes in the biggest musical of our time. 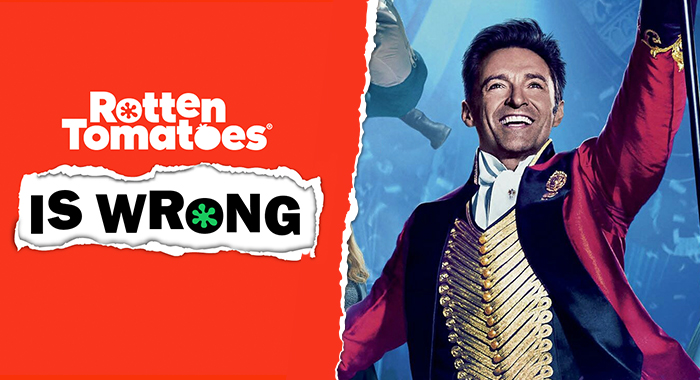 It’s the mega musical your mom can’t stop re-watching with the songs you can’t stop belting out in the shower – but, for critics, 2017’s The Greatest Showman hit some off notes.

The story of P.T. Barnum (Hugh Jackman), his circus, and its stars sat uncomfortably for many of those tasked with reviewing it; they took issue not just with all the on-screen cheese, but with film’s glorification of a man who used and abused the performers who made him money. (Google it: the guy had flaws). Audiences, on the other hand, fell hard for a movie jam-packed with spine-tingling moments, good old-fashioned romance, and a trove of earwormy bangers courtesy of La La Land and Dear Evan Hansen songwriters Benj Pasek and Justin Paul.

So it is that Showman’s Audience Score sits Fresh at 86%, while its Tomatometer score is Rotten at 57% – a divide wide enough for an elephant to dance through. But who got it right?

Joining hosts Jacqueline Coley and Mark Ellis for the last episode of our podcast Rotten Tomatoes Is Wrong for 2020 is John Rocha, creator and host of The Outlaw Nation, Schmoedown legend, and Showman obsessive. Will he be able to convince Coley that this Rotten film is more than simply “the musical McDonald’s”? Tune in and find out.