"Rotten Tomatoes Is Wrong" About... Godzilla: King of the Monsters

With so many fresh ingredients – Godzilla! Ghidorah! Mothra! Millie Bobby Brown! – how did this epic royal rumble end up Rotten? And did it really deserve the big green splat? We're diving in. 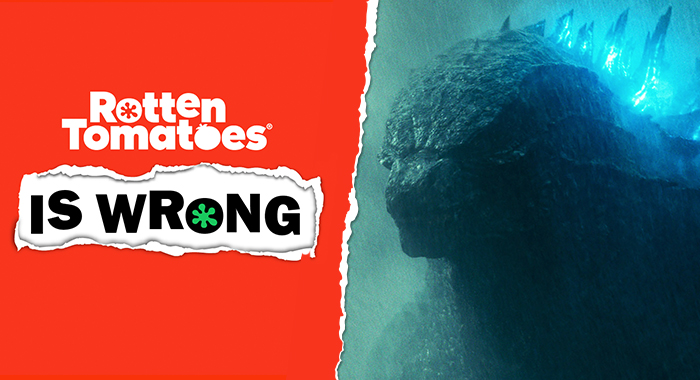 Leading into the release of Godzilla: King of the Monsters, expectations were as outsized as… well, a reawakened titan. Warner Bros. and Legendary’s MonsterVerse had gotten off to a healthy start with fans and critics: 2014’s Certified Fresh Godzilla was celebrated as a thrilling – if somber – re-imagining of the kaiju film, and 2017’s Kong: Skull Island – also Certified Fresh – delighted with its cool ’70s stylings, colorfully drawn characters, and a charming take on the giant monkey. Both had been box office hits.

King of the Monsters was all set to continue the streak, and maybe even up the ante with Godzilla battling fan-favorite foes like Mothra and Ghidorah. But the movie was largely dismissed by critics who found the story cliché-ridden and messy, the human characters dull and unbelievable, and the monster action intermittently thrilling but very difficult to follow. (So much rain! So much darkness!). It became the first Rotten entry in the till-then Fresh franchise. Moviegoers were more forgiving, driving its Audience Score to 83%, but they hardly showed up in droves to see it: King of the Monsters made $110 million at the U.S. box office, just over half of what Godzilla had done five years earlier.

But does this royal rumble truly deserve its reputation as the dark sheep of the MonsterVerse? That’s what we’re asking on the eve of the franchise’s newest entry, Godzilla Vs. Kong, in the latest episode of our podcast Rotten Tomatoes Is Wrong (A Podcast from Rotten Tomatoes). Joining hosts Jacqueline Coley and Mark Ellis is Fandango’s own king of the movies, Erik Davis – together, our trio breaks down the film’s most thrilling (or not thrilling) sequences, where the human story went wrong, and how a movie about brawling beasties managed to make one of our hosts just plain bored.