"Rotten Tomatoes Is Wrong" About... Coming to America

It's Fresh, sure – but shouldn't a royal classic like this be so much Fresher? That's what we're asking in the latest episode of podcast Rotten Tomatoes Is Wrong. 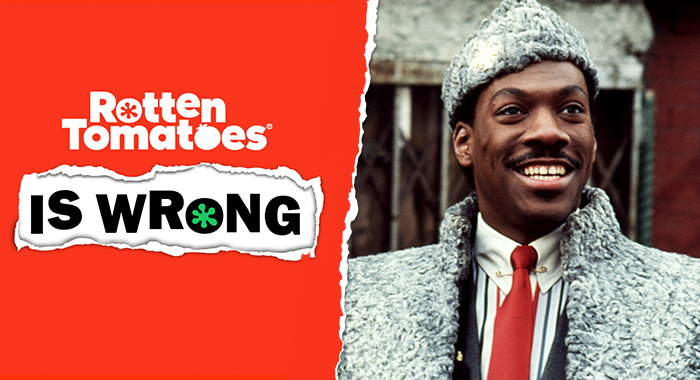 When a movie is considered such an unquestionable classic, is so much a part of the popular culture, and has given us so many classic characters and lines (“Sexual Chocolate!”), it can be a shock to learn that its Tomatometer score is a touch out of step with its reputation.

Such has been the experience of many fans of the beloved Eddie Murphy comedy Coming to America, who – with long-in-the-making sequel Coming 2 America landing on Amazon Prime Video this month – have recently stumbled onto its Rotten Tomatoes page to discover it’s… only at 71% on the Tomatometer?

Not bad, sure, and safely in the Fresh zone, but hardly befitting Zamundan royalty.

We’ve heard your spit takes, America. And read your tweets. And so here we are, taking on the tale of Prince Akeem’s quest for love in Queens in our latest episode of Rotten Tomatoes Is Wrong (A Podcast from Rotten Tomatoes).

Joining hosts Jacqueline Coley and Mark Ellis this week is Sharronda Williams, host of PayOrWait on YouTube and all-round excellent Tomatometer-approved critic. Together, the trio breaks down the megastardom of Eddie Murphy in the late 1980s, why the movie came to be so important for Black audiences, the behind-the-scenes tensions you never knew were there, and, of course, just how off that Tomatometer score really is.