"Rotten Tomatoes Is Wrong" About... Titanic

We're asking the big questions about the onetime biggest movie of all time: Is James Cameron's boat flick one of the all-time great epics, or just a really cool-looking disaster movie with a chilly (and badly written) heart? 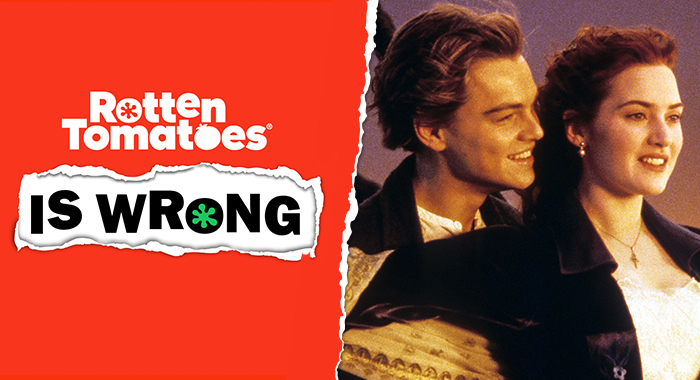 At the Oscars in March 1998, James Cameron declared himself the King of the World – and while many people cringed, it was hard to argue with the superstar director. After all, his sweeping-romance-slash-terrifying-disaster-epic Titanic had just taken home 11 Oscars, tying Ben-Hur’s haul, and was sailing hard past box office records. The man who’d also given us The Terminator and Aliens deserved his crown.

While his film/pop-culture phenomenon hasn’t exactly bumped into any icebergs in the decades since its release – it remains beloved by many, if not the annual VHS-tape–tearing re-watch it once was – the waters are slightly rougher for Titanic than when it first landed in theaters. With the “wow” factor of its technical achievements dampened with time, modern audiences are largely left with the story of star-crossed lovers Jack and Rose (and total psycho Cal) and for many – including a number who swooned at age 15, but roll their eyes all these decades later – it’s a clichéd stinker.

(And yes, Rose definitely could have moved over a little and let him onto that damn door.)

In the latest episode of Rotten Tomatoes Is Wrong, we’re stepping aboard the Certified Fresh onetime biggest film of all time and asking: Did Titanic deserve all those awards and its place – in some people’s ongoing hearts, at least – as one of the greatest films ever made? Joining host Mark Ellis and Jacqueline Coley is Dorina Arellano, one third of YouTube’s Whirl Girls and co-host of Impolite Truths with John Rocha. While Arellano may have had her first kiss during a Titanic screening, that does not mean she was feeling that Jack-Rose heat.