"Rotten Tomatoes Is Wrong" About... Blade

Its middle-of-the-road Tomatometer score belies its outsized influence and place in comic-book cinema. In our latest podcast ep, we're giving "the Daywalker" the respect he deserves. 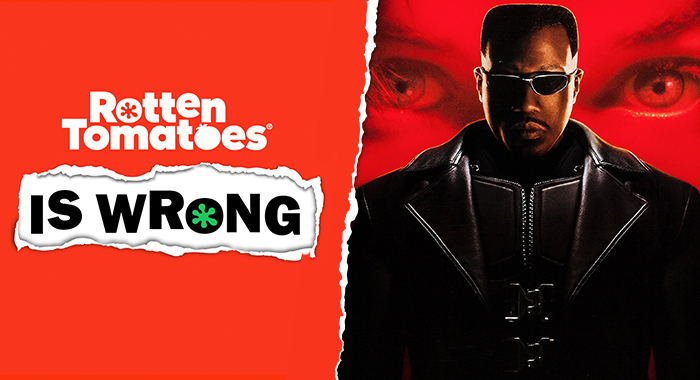 With 22 years of hindsight and history since its release, many writers and critics have pointed to Marvel comic-book adaptation Blade as the dawn of the modern superhero in film – or, at least, a wonderfully bloody bridge between the Batman & Robin doldrums and the X-Men and Spider-Man films that kicked off our current golden age. But at the time of its release, Blade – though a hit – never really connected with critics as anything more than a routine actioner-of-the-week.

It wasn’t that they bared their fangs, exactly: The movie is Rotten on the Tomatometer, but very close to Fresh at 56%, and most reviews at the time singled out star Wesley Snipes for his charismatic turn as the titular “daywalker” and heralded the movie’s fight scenes and set pieces. It’s just that they couldn’t see what many can see now with two decades of moviegoing to help us along: that Blade not only changed the game for comic-book movies, and opened up the door for R-rated superhero fare like Deadpool and more, but that its style and aesthetic would become iconic – and frequently imitated.

So it is that we’re sinking our teeth deep into Stephen Norrington’s action-horror flick and giving it its due in the latest ep of our podcast, Rotten Tomatoes Is Wrong. Joining hosts Jacqueline Coley and Mark Ellis to discuss everything Blade – from the awesomeness of the blood rave and the Wesley Snipes of it all to the movie’s outsized cinematic influence and what we can expect when Mahershala Ali takes on the character in the MCU – is stand-up comic, actor, and former pro-wrestler Jay Washington.

Will he agree with Coley that the events of the movie all come down to one villain’s “twinkle”? Tune in to find out.