"Rotten Tomatoes Is Wrong" About... Star Wars: The Last Jedi

It's the final word on The Last Jedi as our podcast hosts and guest Hal Rudnick look back – now with the gift of time and cooler heads – on the divisive sci-fi epic. 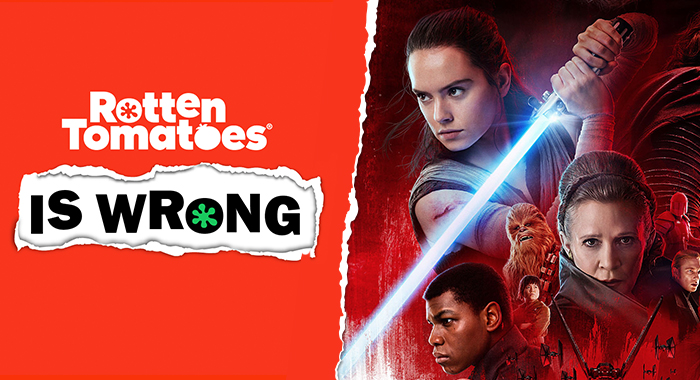 In a year not so far, far away, one sci-fi epic divided fans like nothing that had come before – and more than three years later we still can’t stop talking about why.

For the latest episode of our podcast, Rotten Tomatoes Is Wrong, we’re driving straight into Star Wars: The Last Jedi like a determined Vice Admiral Holdo on a hyperspace suicide mission, digging into all the on-screen and behind-the-scenes controversies, that epic Tomatmeter vs. Audience Score divide, the movie’s bold swings and risks, and asking – with our heads cooler and some time passed – how Rian Johnson’s film stacks up now the sequel trilogy is but a (very triggering) memory.

Joining hosts Mark Ellis and Jacqueline Coley in the throne room (or, um, the Zoom call on which we record this thing) is actor, comic, writer, and host Hal Rudnick, who – like just about everyone when it comes to TLJ – has some thoughts. Will he side with the critics who largely hailed Johnson’s vision a masterpiece? Or with the fans, many of whom thought it was a betrayal of everything they hold dear?

Or will he, you know, land somewhere in the middle – which is a totally reasonable and OK thing to do, right? Tune in to find out.