"Rotten Tomatoes Is Wrong" about... Underworld

Critics largely said it sucked, but fans turned this Kate Beckinsale vampire-werewolf flick into a five-movie franchise. Derivative exercise in style or howling good time? We're breaking it down. 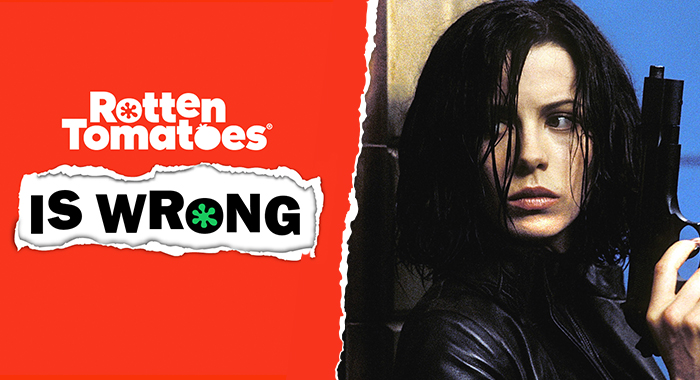 When Len Wiseman‘s Underworld was released back in 2003, the movie about a vampire-werewolf war and the very sexy vampires, werewolves, and humans caught up in it, never really got critics’ blood pumping. In the wake of Blade, which had nailed the R-rated horror-action mashup, and The Matrix, which had redefined trench-coat cool, Underworld – with its comic-book–style blood and plentiful trench coats – seemed “tedious” and “derivative.”

And yet the movie hit with genre fans, who would push its Audience Score to 79% (its Tomatometer Score is a Rotten 31%) and throw down enough cash at the box office to sustain a five-movie franchise, the most recent of which was 2016’s Underworld: Blood Wars.

What do they love about Wiseman’s hyper-stylized, action-packed movies? Well, all that style, for starters. And the movie’s solid and fascinating history and lore. And then there is Kate Beckinsale‘s Selene, the tough-as-nails vampire warrior with a strong sense of justice, incredible marksmanship, and an ability to land any jump while looking cool as f—k. Even critics who grumbled at the been-there-done-that-ness of some of the first movie’s plot points and set pieces praised Beckinsale, whose most celebrated role until Underworld had been in Kenneth Branagh’s adaptation of Shakespeare’s Much Ado About Nothing. In Selene, everyone agreed, the world had been gifted the kind of iconic movie hero we hadn’t seen since Sarah Connor kicked liquid-metal ass in T2.

So, does Underworld deserve more love than that Rotten Tomatometer score is giving it right now? That’s what we’re asking in the latest episode of podcast Rotten Tomatoes Is Wrong, where regular hosts Mark Ellis and Jacqueline Coley are joined by writer, host, producer, Underworld lover, and one third of YouTube’s “The Whirl Girls,” Steph Sabraw. Together, they’ll look at what critics were missing, the power of Kate Beckinsale (and those outfits), how Wiseman got some of Britain’s fanciest thespians to slum it in a genre flick, and why this series became so damn popular.