"Rotten Tomatoes Is Wrong" About... Star Wars: Episode II – Attack of the Clones

It's considered by many to be the most cringe-worthy Star Wars movie ever made, and yet critics didn't quite find it as coarse, rough, and irritating as certain fans. Were they wrong to call this gooey center of the Prequel Trilogy "Fresh"? 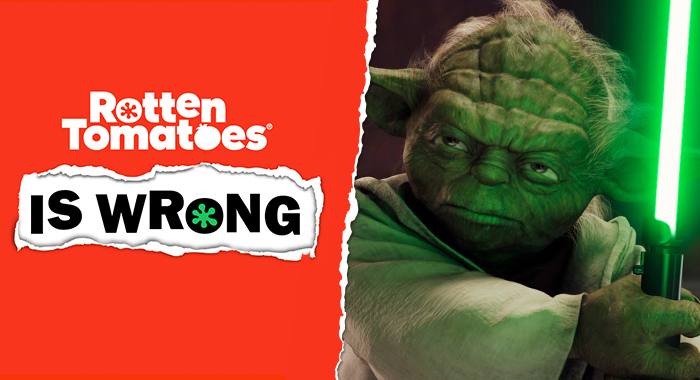 Some people just don’t like Star Wars: Episode II – Attack of the Clones. It’s not that it’s coarse and rough and irritating and it gets everywhere – nope, we will never let the “I don’t like sand” moment die – though, according to many, it’s a few of those things. It’s more that this story of impending clone wars and doomed romance is – at least in the eyes of its critics – sappy, poorly written, terribly acted, and full of CGI that just doesn’t hold up. (Though there is that Yoda fight.)

And yet… while legions of Star Wars fans consider Attack of the Clones the worst of any of the theatrically released Star Wars movies, the Tomatometer would beg to differ. In fact, not only does Attack of the Clones sit higher than The Phantom Menace and The Rise of Skywalker, according to the critics, it does so with a fairly decent Fresh score of 65%, with reviews praising George Lucas’s increased focus on action and move away from endless senate chit-chat.

Who is right? Audiences who deemed the film a Rotten franchise lowpoint? Or the critics who gave it a pass?

In the second podcast episode of our three-part special looking at the Star Wars Prequel trilogy, Rotten Tomatoes Is Wrong hosts Jacqueline Coley and Mark Ellis are picking up their lightsabers and slicing into Attack of the Clones. They’re tackling questions such as: Was Hayden Christensen really that bad as lovesick Anakin Skywalker? Did a totally unfettered George Lucas take his CGI obsession one step too far? And, yes, how good was it to see Yoda finally fight?

Our hosts are joined this week by comedian, actor, and co-host of podcast Blerds N the Hood, Jay Washington.