"Rotten Tomatoes Is Wrong" About... Game of Thrones' Final Season

It's the single Rotten season of one of the greatest TV shows ever made and left some fans as cold as a member of the Night's Watch who forgot his coat. But were critics and audiences too harsh on season 8? 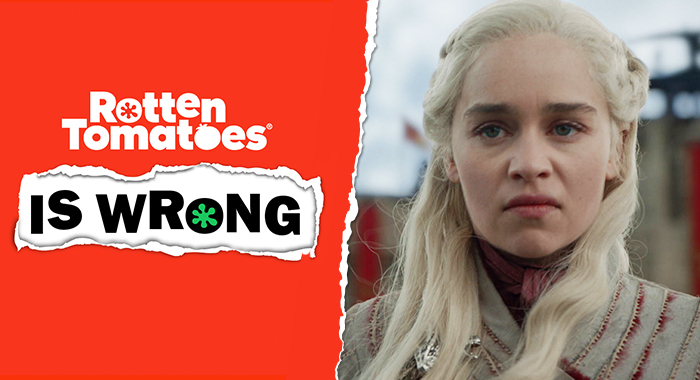 Earlier this month, HBO announced its month-long “Iron Anniversary” – a celebration marking 10 years since Game of Thrones premiered on the service on April 17, 2011. The premium cable network/streaming giant has also recently announced a slew of Game of Thrones spin-offs that will keep fans of George R.R. Martin’s dragon-filled tomes and the original TV adaptation satisfied for the next 10 years. At least. (First in line: a prequel taking us back 300 years from the events of Thrones to a very turbulent period for the Targaryens called House of the Dragon.)

So, we’ve got fire and ice on the brain this week. Which was a perfect reason to go back in time ourselves – just two years, mind – to the time when the very last episodes of Game of Thrones arrived on HBO: an, um, turbulent period for fans of the series, many of whom began season 8’s six-episode run with expectations soaring and ended it in a state WTF disbelief. Story arcs felt rushed, they complained, and characters were taking very out-of-character turns; meanwhile, even the best moments were marred by questionable creative choices. (How much better would “The Long Night” have been if we could have actually seen it?).

Just how much did fans dislike the final season? Its Audience Score sits at just 30%, and critics were only slightly more generous, with their reviews combining to form a Tomatometer score of just 54% – the only Rotten score for any Game of Thrones season. (And it was a big drop from previous years: Every other season is Certified Fresh with a score of at least 90%.)

But was season 8 really that bad? Did a few wrong moves overshadow a whole ton of awesome moments? Was Bran really that terrible a choice for the Iron Throne? That’s what we’re asking in the latest episode of podcast Rotten Tomatoes Is Wrong (A Podcast from Rotten Tomatoes). Joining hosts Jacqueline Coley and Mark Ellis this week is Andres “Ace” Cabrera, co-founder of YouTube channel First Cut and co-host of podcast The Meaning Of. Will he be House Rotten Tomatoes… or tear that Tomatometer score down like some suddenly unhinged dragon queen laying waste to a city and all the innocent civilians who dwell there? Tune in to find out.