Is this pioneering animation/live-action hybrid the slam dunk its fans think it is? Or are they looking back through a nostalgic fog? We're stepping off the bench to play hardball with Warner Bros.' cult favorite. 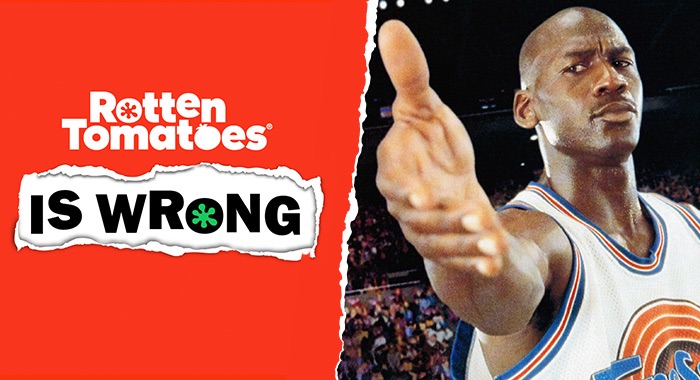 Having recently watched The Last Dance, we at RT really hope Michael Jordan hasn’t ever looked at the Rotten Tomatoes score board for Space Jam, his hybrid animation-live-action hit from back in 1996. That kind of number – 44% Rotten on the Tomatometer, according to the critics – is just the thing that would send the iconic wearer of the number 23 into the kind of dunk-happy rage that would have us ducking for cover.

But while critics didn’t exactly shake their pompoms in glee over the intergalactic story of a basketball game that would decide the fate of the Earth, audiences ate it up and Space Jam became something of a cult hit over its 25 years of existence. That’s especially true for ’90s kids, bedecked in the Tune Squad gear they got for Christmas – and the latest Air Jordans – and just as enamored by the manic tornado-like madness of the Tasmanian Devil as they were by the charismatic star of the Chicago Bulls.

And then there was that soundtrack.

With Warner Brothers hoping to recapture all that magic – and, let’s face it, sell some merch – with the release of Space Jam: A New Legacy, starring LeBron James, we thought there was no time like the present to revisit the original film in the latest episode of our podcast Rotten Tomatoes Is Wrong. Was this merely a cynical cash grab by two major corporations keen to squeeze America’s parents’ pockets for all they could? Or was there a good time to be had here, with so much color and action and a totally random but totally winning turn by Bill Murray?

And can we even answer those questions honestly through the haze of nostalgia which has enshrined the film since its release?

To answer all those questions and more, our hosts Mark Ellis and Jacqueline Coley are joined by pop-culture MVP and Rotten Tomatoes correspondent Naz Perez. Will she side with the critics who dunked on Space Jam or the fans who believed this movie could – and did – fly? Tune in to find out.