"Rotten Tomatoes Is Wrong" About... Tenet

We're going backwards in time almost a year (passing our forward-moving selves and confusing the s--t out of everyone watching us) to ask whether Christopher Nolan's Tenet is a masterful puzzle or mind-melting mess? 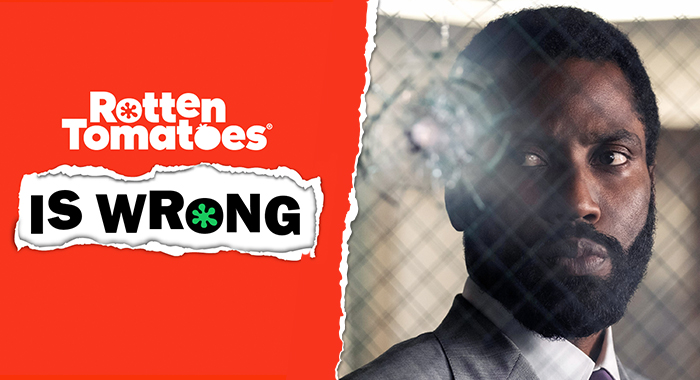 Christopher Nolan’s Tenet was supposed to be the movie that saved cinemas when it opened, after numerous delays, in September 2020. And while the mind-melting film did manage a reported $20 million debut – not bad considering the restricted-capacity seating and the limited number of cinemas that were open at this time of the pandemic – that number was seen as soft enough that various studios began to push their big tentpole releases further back in the year and into 2021 to avoid the same fate. Nolan’s hyped-up actioner had landed not with an Inception-esque BWONG!, but with a whimper – one that left Hollywood feeling nervous.

Meanwhile, many audiences were left feeling deeply confused. Officially billed as a movie about a secret agent (John David Washington) on a time-bending mission to prevent the outbreak of World War III, Tenet was seen by some to be completely impenetrable – the kind of movie in which bullets move backwards in time (because… radiation?), characters literally tell each other not to bother following along with what’s going on (as other versions of themselves stroll by… backwards), but in which everyone looks very, very cool in their awesomely tailored threads. It made Inception seem like a kindergarten worksheet; it made no sense (right?), but damn that highway sequence was cool!

In its wake, a whole industry of “Tenet Explained” articles and videos popped up, and those who wanted to put in the work devoured them as they rewatched the movie backwards and forward – with subtitles on. Others simply went, “Meh,” believing Nolan had disappeared too far up his own Rabbit Hole this time around. Critics were relatively kind, though, but many noted that while it was dazzling to look at and experience, the movie sacrificed character and depth in favor of incompressible spectacle. And then there was the sound. At 70% Fresh on the Tomatometer, it is the lowest-scoring movie of Nolan’s career. But should it be?

That’s what we’re asking in the latest episode of our podcast, Rotten Tomatoes Is Wrong (A Podcast from Rotten Tomatoes), where co-hosts Jacqueline Coley and Mark Ellis are joined by Mike Kalinowski, actor (Black Monday), podcaster, and five-time Trivia Schmoedown Champion. Will he convince them that the movie’s Tomatometer score is “insane” and purely a result of people not getting it, man? Or will Jacqueline convince him that it’s a filmmaker’s job to, you know, show a little respect for the folks watching his film? Tune in to find out!