The Good Morning Football and Frogger host explains why the endlessly quotable action flick is 100% pure adrenaline and yuppie insects shouldn't bother with it. 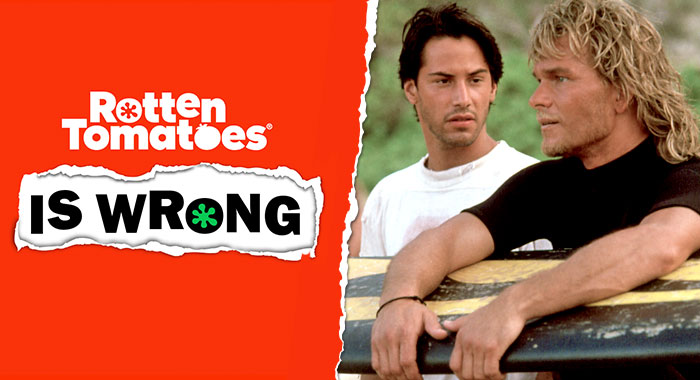 “You’re trying to tell me the FBI’s going to pay me to learn to surf?” Yes, Johnny Utah, yes, that’s exactly what Angelo Pappas was trying to tell you. Director Kathryn Bigelow’s seminal 1991 film Point Break remains one of the most fondly remembered — and endlessly quotable — action movies to come out of the decade, and in the years since its release, it has become a celebrated cult classic, spawning a cheeky live theater show, a 2015 remake, and even a couple of craft beers. We won’t even get into how The Fast and the Furious is, beat for beat, essentially the same movie, and that blew up into a multi-billion dollar franchise.

For all of its oddball charms and macho sex appeal, Point Break had the misfortune of opening on the same day as John Singleton’s groundbreaking drama Boyz N the Hood and just one weekend after another iconic ’90s action flick, Terminator 2: Judgment Day (directed by no less than James Cameron, Bigelow’s husband at the time), which became the highest-grossing film of the year.

And while it isn’t the most Rotten film we’ve covered on this podcast, there was no shortage of film journalists who found it difficult to vibe with the forbidden bromance between Keanu Reeves’ rookie FBI agent Johnny Utah and Patrick Swayze’s bank-robbing surfer Bodhi. The same line readings that fans found so charmingly off-kilter made critics cringe, and the absurdly over-the-top action sequences some considered 100% pure adrenaline drew comparisons to soft drink commercials. If you want the ultimate, you’ve got to be willing to pay the ultimate price.

What is it about Point Break that fans inherently understood and critics didn’t? This week, we’re bracing for a 50-Year Storm as we dive headfirst into the debate. Joining regular co-hosts Jacqueline Coley and Mark Ellis is a man who knows a little something about adrenaline junkies: television personality Kyle Brandt, who co-hosts the NFL Network’s Good Morning Football and the insane Peacock obstacle course game show Frogger. Brandt explains that trying to choose the best scene in Point Break is like looking up at the Sistine Chapel and picking a favorite color and notes that if you’re ever in a foot chase, make sure to have a small dog handy to toss at your pursuers.