"Rotten Tomatoes Is Wrong" About... The Sopranos

We're debating the greatest show of all time (we're not arguing, we value our lives too much): Which season ruled? Which characters were most iconic? And which whack hit hardest? 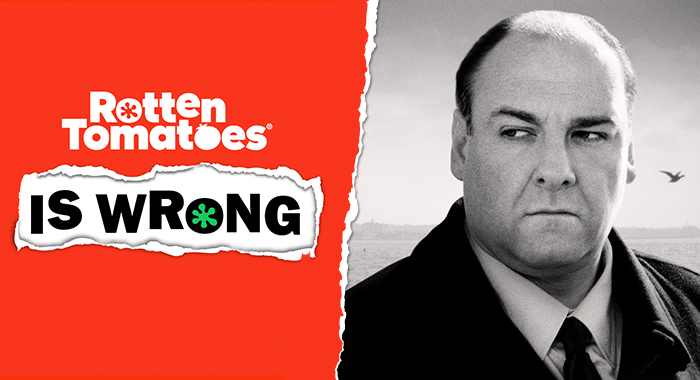 It’s been more than 14 years since The Sopranos left the prestige-TV stage and fans are still debating which of its seasons is the best, which of its whacks truly broke us, and whether its finale was a slap in the face or simply kicked tons of ass.

This week, fans will have more to discuss and chew on as Sopranos prequel film The Many Saints of Newark opens in theaters and begins streaming on HBO Max. The movie – co-written by series creator and mastermind David Chase – centers on young Anthony Soprano (played in part by James Gandolfini’s son, Michael) and the mob-boss uncle who mentored him, Dickie Montisanti (Alessandro Nivola), and features many fan-favorite characters from the show, including Junior (Corey Stoll), Paulie (Billy Magnussen), and Silvio (John Magaro).

With all eyes back on the bad boys (and girls) of Jersey, and many fans bingeing the original series in preparation for the film, we thought it was time to talk all things Sopranos on the latest episode of our podcast, Rotten Tomatoes Is Wrong.

Now, unlike other episodes, where we take a low-scoring movie and ask whether it should be Fresh (or vice versa), here our hosts Jacqueline Coley and Mark went a little deeper: Should season 6.5 (that’s what we’ll call the second part of the final season) really be the series’ lowest-scoring on the Tomatometer? Should season 3 be its highest? Which stories and performances still stick with us to this day? And… is The Sopranos worthy of the title so often bestowed upon it: The Greatest TV Show of All Time?

Joining them to talk family, therapy, and loyalty is Sopranos superfan, Schmoes Know co-creator, and chairman of the Movie Trivia Schmoedown, Kristian Harloff.