"Rotten Tomatoes Is Wrong" About... Armageddon

We're drilling-baby-drilling into the molten core of one of the 1990s' most unrelenting blockbusters: Is Michael Bay's smash hit dumb as a rock, an explosive good time, or all of the above? 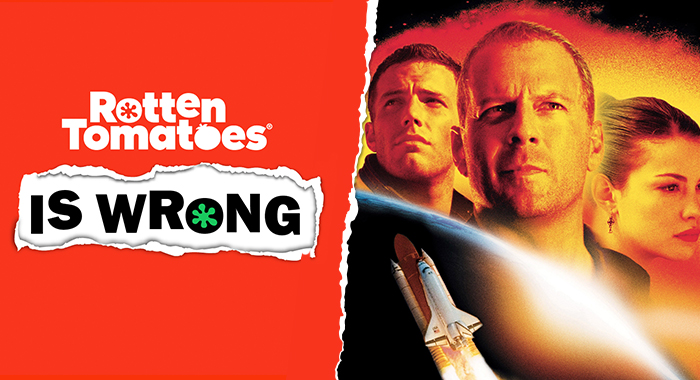 Is there any movie that embodies the “America, F—k yeah!” spirit so hilariously parodied in Team America quite so well as Michael Bay’s Armageddon? With its endless explosions and mammoth globs of testosterone and the one-two American-hero punch of Ben Affleck and Bruce Willis in the lead roles, the movie feels like the celluloid equivalent of a living, breathing American flag… somehow riding on a Harley… while guzzling a Miller Lite… all while blasting Aerosmith’s “I Don’t Want To Miss A Thing,” of course.

What better film, then, to revisit as we head into the July 4 weekend than Bay’s beloved asteroid thriller? (Certainly, it’s a better choice than that wimpy, geeky, and emotionally complex drag, Deep Impact. Hard pass, bro.)

Unsurprisingly, perhaps, for a movie which posits that NASA would rather train a group of oil drillers to go to space to save the world than teach a group of astronauts how to drill, critics had some issues with Armageddon, their less-than-enthusiastic reviews giving it a Rotten Tomatometer score of 38%. Sure, the effects looked great, many admitted, but it was all a bit… dumb. And frantic. The Wall Street Journal claimed the movie redefined “the standard for summer stupidity”; the filmmakers’ “pomposity knows no limits” decried The Baltimore Sun. New York’s Daily News summed up the general sentiment nicely, writing: “The end of the world is going to be very noisy and filled with some of the worst dialogue ever.”

Audiences clearly disagreed. Not only was Armageddon a smash at the box office – the second biggest movie of 1998 behind only Titanic – but its Audience Score sits almost 40% above its Tomatometer rating, at 73% Fresh. Who is right and who is wrong? (This is Bay territory, we only do black-and-white here, kids). And what kind of heartless monster doesn’t run through at least two boxes of Kleenex during that final conversation between Willis and Liv Tyler? “I lied to you, too…” Ugh, we can’t even finish typing it… Sorry.

Those are the questions we’re asking in the latest episode of our podcast, Rotten Tomatoes Is Wrong (A Podcast from Rotten Tomatoes), in which hosts Mark Ellis and Jacqueline Coley are joined by Lon Harris, writer for Screen Junkies and Fandom and co-host of the Binge Boys podcast. Together, our heroic trio drills deep into all things Bay, Ben, and Bruce; big rocks and big rock ‘n’ roll; and the reason why sometimes watching the stupid movie is the smart choice.