"Rotten Tomatoes Is Wrong"... According to Chance the Rapper 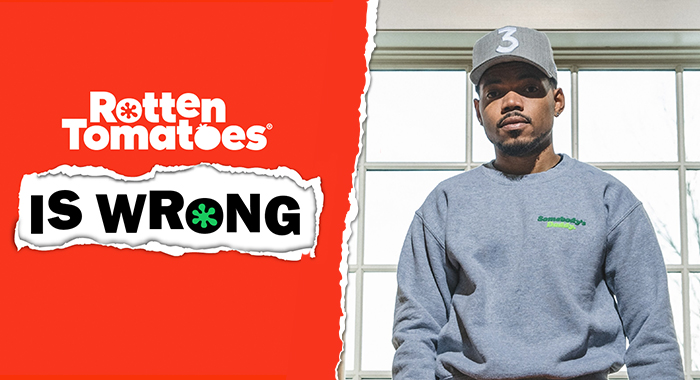 Music superstar Chance the Rapper has been calling us out for years over certain Tomatometer scores that have rubbed him the wrong way. You may even recall, back in September of 2017, that Chance made headlines when he took particular issue with the score for the Amy Poehler-Will Ferrell comedy, The House, which was Rotten at the time with a score of just 17%. (It has since eked its way up to 20%.)

In a Tweet that has accumulated 14,000 likes, Chance said The House was “funny as f—k” and addressed us directly: “Wtf @rottentomatoes.”

According to reports, Chance had put us “on notice,” was “very unhappy,” and there was suddenly considerable “beef” between us and the Chicago legend. (Editor’s note: There certainly wasn’t any beef – we have a lot of time for The House, too!).

So, naturally, we’ve always wanted him to join us on our podcast Rotten Tomatoes Is Wrong – he was basically its inspiration. And it turns out dreams can come true. For our very special 52nd episode – which marks one year since we launched in September 2020 – Chance the Rapper sat down with host Mark Ellis to talk about several movies whose Tomatometer scores have made him go, “WTF Rotten Tomatoes!?,” over the years.

First up, another comedy: the Andy Samberg-starring Hot Rod, the cult favorite about am accident-prone stuntman fundraising to get his stepdad an operation… so he can then beat him up. Its Rotten score of 39% is unfathomable, according to Chance, who says it belongs in the same breath as The Godfather, Casino, and Citizen Kane: “It’s in the pantheon of amazing cinematic accomplishments,” he told us.

And then there’s 1998 political satire, Bulworth, co-written by, directed by, and starring Warren Beatty, which also comes with a score – Certified Fresh at 76% – that Chance… let’s just say, disagrees with. “It’s one of the most heinous things to ever happen on camera for an hour-and-a-half,” he said. “It’s so disturbing. When you watch it, you will not believe that this is a real movie.”

In a fascinating and extended conversation, the star talks with Mark about his love for Samberg and Hot Rod, his repulsion with Bulworth, dishes on backstage stories from his times on SNL, and puts out a controversial opinion about The Godfather movies.

Plus: He takes us behind the scenes of his own new movie, the documentary concert film Chance the Rapper’s Magnificent Coloring World, which some critics are calling a game-changing entry in the genre.