"Rotten Tomatoes Is Wrong" About... The Lost World: Jurassic Park

Is it an underrated sequel, or were the folks behind it too preoccupied with whether or not they could that they didn't stop to think if they should? 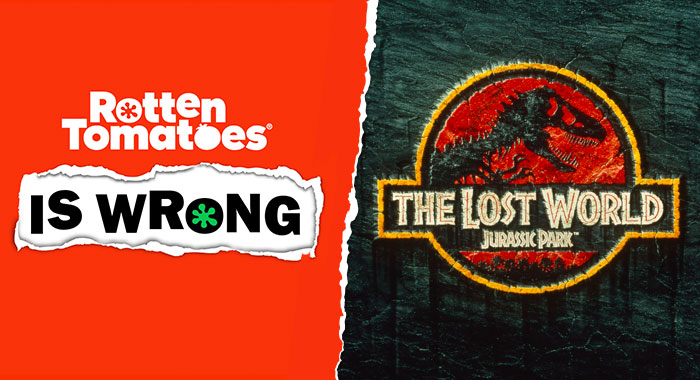 Steven Spielberg’s Jurassic Park is unquestionably one of the celebrated director’s most beloved films, and for good reason. It broke new ground in special effects even as it inspired equal parts awe and terror in its utterly gobsmacked audiences, and it went on to become not only a hit with critics but also the highest-grossing film of its time. Based on Michael Crichton’s eponymous novel, the film spawned a multimedia franchise that has included toys, video games, comic books, television series, and more, and we’re on the verge of getting the sixth installment of the film series, Jurassic World Dominion, this summer.

In other words, it’s a great time to take a look back at one of its less acclaimed entries, namely The Lost World: Jurassic Park. Also based on a Michael Crichton novel (albeit somewhat loosely), The Lost World failed to wow moviegoers the same way its predecessor did, to say the least. While the first film earned a Certified Fresh 92% on the Tomatometer and a 91% Audience Score, The Lost World managed just 53% and 51%, respectively.

Sure, we’re all familiar with the law of diminishing returns when it comes to sequels, but The Lost World had Spielberg back at the helm and brought back fan favorite character Dr. Ian Malcolm, the ever-skeptical mathematician played by Jeff Goldblum. The film also added Julianne Moore, Vince Vaughn, and top-notch character actors like Pete Postlethwaite and Peter Stormare, among others, as well as updated state-of-the-art visual effects that made the dinos even more lifelike than before. So what went wrong?

If you ask the critics, about half of them would tell you that the film felt obligatory, that it lost most of what made the original so awe-inspiring in favor of more boilerplate monster movie trappings, even if those creature effects were outstanding. They’d tell you that the makers of the sequel were so preoccupied with whether or not they could that they didn’t stop to think if they should. Oh, and the scene of Vanessa Lee Chester’s young Kelly Curtis dispatching a raptor with gymnastics? Well, that was certainly something.

But if you ask fans today, there’s a solid contingent of them who will tell you The Lost World was unfairly maligned. They’ll point to legitimately thrilling scenes, like the research trailer dangling off the edge of a cliff or the raptor chase through tall grass. They’ll note the committed performances from the cast, led by a breathlessly charismatic Jeff Goldblum, and the non-stop action, bolstered by the aforementioned creature effects. This was, as one critic put it, “The Aliens of Jurassic Park movies,” and for some, that was plenty enough.

Joining regular co-hosts Mark Ellis and Jacqueline Coley this week is Jurassic Park superfan Perri Nemiroff, film critic and host of the Collider Ladies Night Podcast, who came prepared to argue why The Lost World deserves to be regarded higher in the dino canon. She acknowledges the sequel could never live up to the original, but like other fans of the film, she explains why the thrilling set pieces, impressive visual effects, and franchise-influencing plot points make it a crucial entry. Mark also thinks the Tomatometer could be a bit higher, but Jacqueline feels the critics were just about right on this one, adding that the climactic San Diego rampage is arguably “the worst 15 minutes Steven Spielberg ever decided to put in a movie.”