"Rotten Tomatoes Is Wrong" About... Solo: A Star Wars Story

Nobody asked for an origin story for Han and Chewy, but is the end result a Kessel Run worth skipping, or is it actually a pretty fun ride that flies under the radar of most fans? 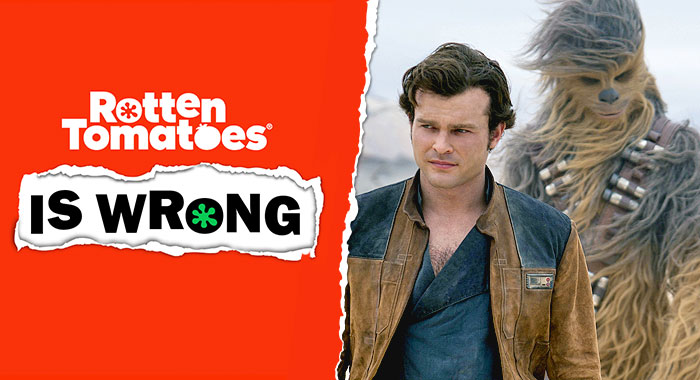 Harrison Ford’s Han Solo is unquestionably one of the most indelible pop culture icons to come out of the Star Wars franchise, with his confident swagger, handsome profile, and knack for dropping unforgettable one-liners. So when Disney and Lucasfilm dreamed up the Star Wars Story series of films with the intent of filling in some narrative gaps between major installments of the ongoing “Skywalker Saga,” it probably seemed like a no-brainer to delve into the mysterious past of the galaxy’s most famous smuggler. After all, look how well Rogue One did, right?

Unfortunately, as soon as Solo: A Star Wars Story was announced, the cries of “Why?” and “Nobody asked for this” came swift and strong.

If there was a saving grace to the enterprise, it was that Phil Lord and Christopher Miller — the duo who had breathed life into the Jump Street movies and The Lego Movie — had been tapped to direct, pointing to what might possibly be the first outright comedy of the Star Wars film franchise. But that’s not at all what bigwigs Kathleen Kennedy and Lawrence Kasdan wanted, so Lord and Miller were replaced by Ron Howard, which inspired a collective shrug from the community.

And then there was Alden Ehrenreich. Make no mistake: he showed promise in previous roles, particularly the Coen brothers’ Hail, Caesar!, but come on. Who could possibly step into Han Solo’s boots after Harrison Ford?

At the end of the day, whether anybody “asked for this” or not, Solo got made, and, well, the critics didn’t think it was too bad. Granted, it was no Rogue One, but most felt that Ehrenreich acquitted himself as admirably as possible, the action was satisfyingly energetic, and the storytelling was both specific enough to cater to fans and broad enough to appeal to neophytes. Again, we weren’t talking top-shelf Star Wars here, but folks largely found it serviceable.

Or did they? While Solo: A Star Wars Story sports a 70% Tomatometer score, over 25,000 audience ratings have the standalone flick at 64%. So what made everyone so wishy-washy about the movie? Why did everyone think Solo was just, you know, so-so?

Joining regular co-hosts Mark Ellis and Jacqueline Coley this week is someone who’s been ’round to talk Star Wars with us before, specifically about The Mandalorian: broadcaster, comedian, and, appropriately, the author of Why We Love Star Wars, Ken Napzok, who also co-hosts the ForceCenter podcast. In other words, he knows a little something about the franchise, and he’s got opinions. In this case, his opinion is that Solo deserves not to be forgotten, and upon a recent rewatch, Mark would tend to agree. Jacqueline, on the other hand, thinks the critics were spot on this time, so it takes a bit of convincing for her to see what the boys did.