"Rotten Tomatoes Is Wrong" About... Star Wars: Return of the Jedi

Let the hate flow through you -- or not -- as we celebrate May the 4th by reexamining the perhaps unfairly judged finale of the Star Wars Original Trilogy. 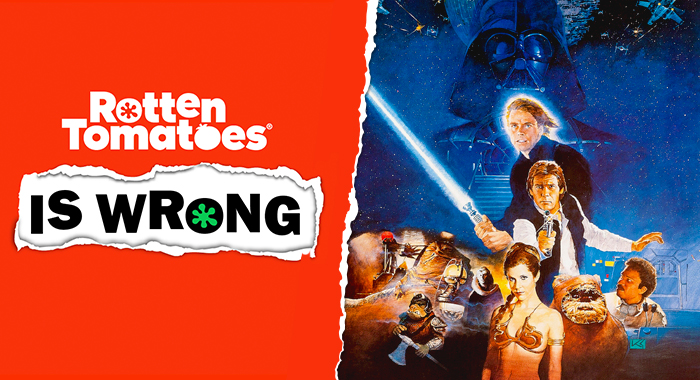 When it debuted in 1977, George Lucas’ Star Wars became a cinematic phenomenon unlike anything we’d ever seen before, and its legacy can be felt to this day in the multimedia juggernaut it inspired. Its follow-up, 1980’s Star Wars: Episode V – The Empire Strikes Back, turned the first film into a bona fide saga and became widely regarded not only as one of the best sequels of all time, but even better than the first. And while the finale of the Original Trilogy, Star Wars: Episode VI – Return of the Jedi, earned relatively strong reviews, for many years — at least until we got the prequels of the 2000s — it was considered the weakest link among the three. As we celebrate May the 4th — exhibit A in the case for the first film’s enduring pop culture relevance — maybe it’s time to reconsider that.

Regular host Mark Ellis is joined this week by a pair of appropriately die-hard Star Wars fans to discuss the merits — or lack thereof — of Return of the Jedi. First up is returning guest Ken Napzok, stand-up comedian, co-host of the the ForceCenter Podcast, and author of the book Why We Love Star Wars. And making her “RT Is Wrong” debut is actress, host, and film critic at The Movie Couple, Wendy Lee Szany.

Ken admits that he thinks Return of the Jedi’s 83% Tomatometer score is “fair” but feels it should be a little higher. Wendy remembers being blown away by the movie as a kid in Taiwan and believes its  Tomatometer score is “certainly wrong;” she likewise would like to see it a few rungs higher. Mark, though, is on another level altogether: Not only is Return of the Jedi his favorite Star Wars movie, it is his absolute favorite movie of all time. You can guess where lands in this debate. Tune in to hear the trio talk about the nostalgia factor of the film, their favorite scenes, the overarching themes, and of course, the Ewoks.