"Rotten Tomatoes Is Wrong" About... Dune (Both of Them)

Denis Villeneuve's adaptation of Frank Herbert's novel was as epic as its sandworms, but is it a spicy take to say David Lynch's infamous 1984 version maybe isn't quite the cinematic tragedy we all remember it to be? 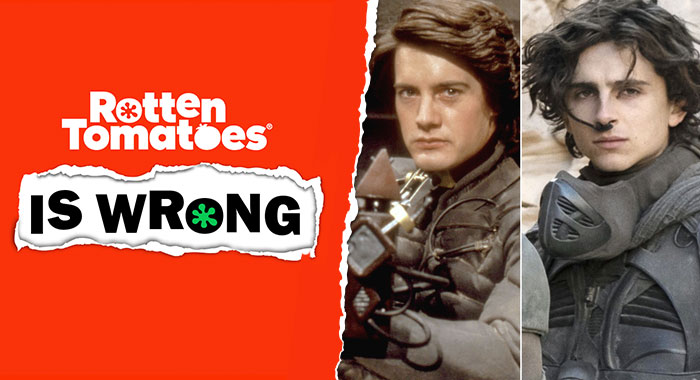 Frank Herbert’s seminal sci-fi novel Dune, a sprawling tale of warring families on distant planets, has been widely regarded as “unfilmable,” but that didn’t stop people from trying to get it made into a movie several times. After the success of Star Wars, producer Dino de Laurentis was eager to churn out an epic space opera of his own, so he (eventually) knocked on David Lynch’s door, gave him $40 million (the largest film budget ever at the time), and we got 1984’s Dune. That film was a notorious critical failure (44% on the Tomatometer) and box office flop, and it was the only movie version of the novel we had until Denis Villeneuve, a lifelong fan of the novel, said, “Lemme give it a go.”

Villeneuve’s Dune — just Part One of Two — debuted in late 2021 in theaters and on the HBO Max streaming service, earning a Certified Fresh 83% Tomatometer against a 90% Audience Score, and it’s currently up for 10 Oscars, including Best Picture, though Villeneuve’s absence from the Best Director category is widely considered a noteworthy snub. Packed with A-list talent on screen and guided by Villeneuve’s steady directorial hand, the film largely lived up to its near-impossible-to-meet expectations for most fans.

On the other hand, dissatisfied with rampant studio interference on the film, David Lynch famously disowned the earlier Dune after its release, so much so that he even insisted his name be removed from various subsequent edits of it. Despite that, it has gone on to inspire a cult following of fans who dig its challenging themes and bizarre but distinctly Lynchian idiosyncrasies. Of course, there are still plenty of folks who loved the original novel who found Lynch’s version unsatisfactory, perplexing, and downright goofy, but it’s far more interesting to hear what the die-hard fans of Dune ’84 actually like about it.

And now that Denis Villeneuve’s adaptation of the first half of the novel has been deemed a smashing success, it’s a great time not only to reexamine Lynch’s earlier work, but to compare it against Villeneuve’s and get to the bottom of what worked and what didn’t… in both films. It may be true that there are fewer quibbles with Villeneuve’s Dune than there are positive ways to spin Lynch’s version, but there is a lot of story to cover, and our guest this week has thoughts on all of it.

Joining regular co-hosts Jacqueline Coley and Mark Ellis is one Alex Pappademas, host of The Big Hit Show podcast and author of the upcoming book Keanu Reeves: Most Triumphant – The Movies and Meaning of an Irrepressible Icon. Alex notes that, when Lynch’s Dune came out, it was, as Dino de Laurentis intended, marketed to kids, complete with a toy line and children’s books. He remembers getting the Dune storybook as a 7-year-old and being subsequently baffled and traumatized by the film, only to rewatch it later as a David Lynch fan and find new ways to appreciate it as a very Lynchian concoction. Both he and Mark feel the Tomatometer score for Lynch’s Dune should be much higher, while Jacqueline wholeheartedly disagrees. And after digging into the earlier Dune, the three dive into Villeneuve’s film to nail down why it worked so much better.