"Rotten Tomatoes Is Wrong" About... Transformers

Is there more than meets the eye to Michael Bay's explosive action blockbuster, or is it a prime example of the director's most excessive instincts? 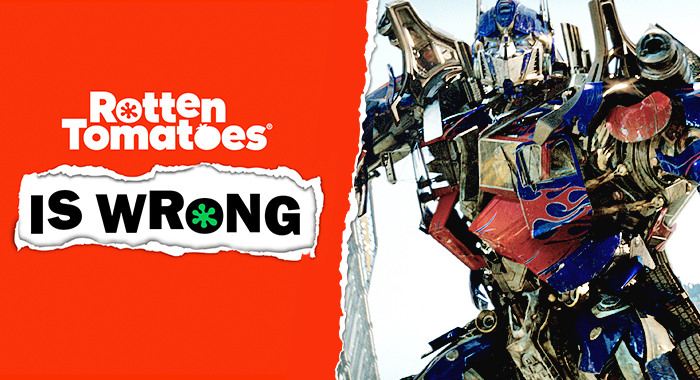 For a certain segment of the moviegoing population, Michael Bay’s 2007 blockbuster Transformers was their introduction to the world of the shapeshifting robots known as Autobots and Decepticons. For a certain older generation of fans, however, it was an exciting moment of childhood wish fulfillment, an opportunity to see their beloved robots in disguise on the big screen in “live action.” When the film finally released, it topped its opening weekend en route to earning over $700 million at the global box office, but it largely failed to impress the critics.

Of course, Bay, who had already done The Rock, Armageddon, and a pair of Bad Boys movies up to that point, had built a reputation for larger-than-life action cinema, so in some sense, he was a great fit for the material. Plus, visual effects had come such a long way by 2007 that folks were eager to see how well the previously 2D-animated Optimus Prime and Megatron would translate to a live-action film with a $150 million budget.

And what was the end result? It kind of depends on who you ask. Transformers is just shy of Fresh at 58% on the Tomatometer, which means that, technically speaking, a small majority of the critics who saw the movie thought it was a good effort. Some of them thought the film was a breathtaking action spectacle populated by likable performances, even if the story felt a little thin. Others thought the big set pieces were choppy and incoherent, and the choice to focus primarily on the human characters more so than the robots was baffling.

Also depending on who you ask, those human characters either helped anchor the film with hilarious, relatable performances, or they ruined it by distracting from the main attraction and taking an obnoxious kitchen-sink approach to comic relief. Shia LaBeouf is either a jittery “crackhead dialed up to four” of a protagonist, or he’s a perfect audience surrogate, and yes, it’s nice that Megan Fox is more than just a damsel in distress, but her gearhead Mikaela Barnes is consistently shot as if she’s the eye candy in a hypersexualized music video.

In contrast to the Tomatomter, the Audience Score sits at a staggeringly healthy 85%, so what’s with the discrepancy? Much to the chagrin of some movie fans who love to roll their eyes at any mention of the director, there are certainly plenty of Michael Bay apologists out there. The man loves his explosions and spinning cameras, sure, but he also knows his way around complicated visual effects and compelling action set pieces. At the end of the day, Transformers remains his second-best-reviewed film behind The Rock, and both are tied for his highest Audience Score.

But there are absolutely fans from that older generation, the one that grew up watching the after-school cartoons in the 1980s, who bristled at the dramatically altered character designs (Optimus Prime has lips? Bumblebee is a Camaro?) and bizarre character choices (we need to talk about Jazz). What we’re trying to say here is that people have feelings about this movie, which makes it kind of perfect for us to talk about.

Joining regular co-hosts Jacqueline Coley and Mark Ellis this week are two guests who have appeared separately before but never together, and we’re so glad they could both join: Jay Washington and Winston A. Marshall of Blerds N the Hood. Jay, who grew up with the original series and even recently rewatched it, remembers going into Michael Bay’s film excited and coming out so angry he wanted to “fight people, just because” – he thinks Transformers’ Tomatometer should be lower. Winston, on the other hand, thinks 58% is about right; Mark is willing to go Fresh on it, and Jacqueline? Well, she’s the biggest fan of them all, and she thinks it might have something to do with the fact that she had no emotional attachment to the characters before she saw the film. She might not be far off on that point.