"Rotten Tomatoes Is Wrong" About... Fifty Shades of Grey 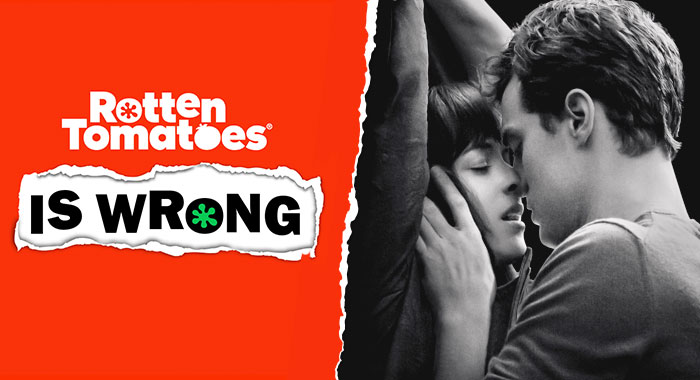 If you were somehow unaware, you read that right. A British woman named Erika Mitchell became so obsessed with the Twilight films and books that she wrote her own sequel, which eventually morphed into the self-published novel that then became the feature film about a naive coed who enters into a sadomasochistic relationship with a handsome billionaire.

Mitchell, who initially published under the pen name “Snowqueens Icedragon” before settling on the much more respectable E.L. James, admitted that the Fifty Shades books contained “all my fantasies” and were her “mid-life crisis, writ large,” but the success of the series — both the books and the films — would imply that she was absolutely not alone. The first book has been translated into 52 languages and has sold more than 150 million copies worldwide, and the film adaptation earned over half a billion dollars at the global box office.

As far as the critics were concerned, well, the film (and the book, for that matter) failed to set their hearts aflutter. Fifty Shades of Grey sits at 25% on the Tomatometer (even Twilight at least notched a 49%) with a  higher but not particularly impressive Audience Score of 41%. Looking at its box office haul, whoever was into this movie was really into this movie.

As a rare treat, regular co-hosts Jacqueline Coley and Mark Ellis do not have a guest with whom to whip these questions around. No, this week, it’s all about the symbiotic, loving, and mutually respectful relationship between Jacqueline and Mark, as they discuss the runaway success of the film, the little things it actually got right, and why, as Jacqueline would have it, it should be Fresh.