"Rotten Tomatoes Is Wrong" About... The Dark Knight Rises

With The Batman looming on the horizon, we look back at the final chapter of Christopher Nolan's trilogy to see if it was the hero (movie) we deserved or something closer to Gotham's reckoning. 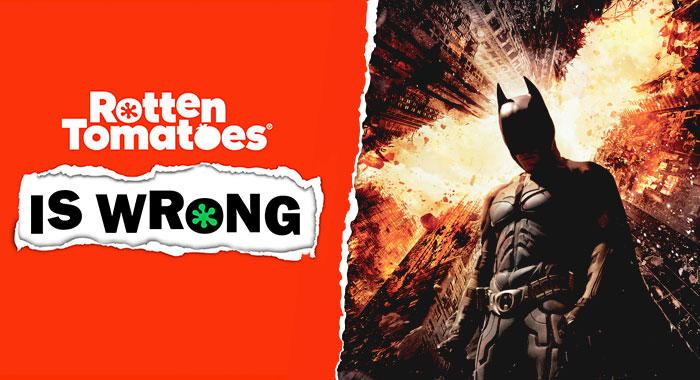 We are just a week away from getting the latest iteration of Batman on the big screen, thanks to a little Matt Reeves-directed, Robert Pattinson-starring film called, appropriately, The Batman, so what better way to celebrate it than to dive deep into one of the most controversial installments of the Caped Crusader’s storied career. No, we’re not talking about Batman & Robin; nobody says they love that movie without a hint of irony. No, we’re not talking about the awkwardly titled Batman v Superman: Dawn of Justice; we already covered that one. That’s right: It’s time to talk about The Dark Knight Rises, the capstone to Christopher Nolan’s Dark Knight Trilogy.

“But wait,” you say. “that movie is Certified Fresh at 87% with an Audience Score of 90%, and it made over $1 billion! What is there to debate?” The answer is “more than you think,” at least if you ask our hosts and their special guest on this week’s episode. It’s true that Rises did gangbusters at the box office and impressed most of the folks who saw it, from critics to general audiences, but as one listener who wrote in to us acknowledged, you can both love this movie for the epic finale that it is and still recognize that there are some wonky elements and there’s a bit too much going on.

For every fan who touts the grand spectacle of the film’s opening sequence and the iconic introduction of Tom Hardy’s Bane, you’ll find another who points out how unintelligible Bane was and, let’s be honest, how silly some of the dialogue sounds — there is a reason Bane became prime meme fodder. For every die-hard who appreciates the story coming full circle and calling back to the first film, there’s another who will concede Talia al Ghul’s death scene is perhaps the goofiest in recent memory.

There are few folks who would fault Nolan for perhaps not fully matching the achievement that was The Dark Knight, which many consider not just a contender for best superhero movie ever, but also one of the greatest films ever made, period. But there are those, rare as they may be, whose love for The Dark Knight Rises eclipses its predecessor, and one of them is our guest this week. Don’t worry, he’s fully aware that’s a hot take.

Joining regular co-hosts Jacqueline Coley and Mark Ellis is actor, host, DC super fan, and world-class Michael Caine impressionist Mike Kalinowski, who returns to our podcast to explain why he feels The Dark Knight Rises felt more like the comic book Batman he wanted than The Dark Knight did. He believes the film ends the trilogy in deeply satisfying fashion, and its Tomatometer score is spot on. For her part, Jacqueline thinks the movie is good — not great — and argues that some folks gave Nolan a pass here because they’ve enjoyed his other work so much. And Mark? Well, Mark thinks the film has some great moments, but it completely falls off a cliff in the third act and there’s just too much to forgive for him to call it a Fresh film.