We decide if the killer Queen biopic that rocked the Oscars should remain a champion or bite the dust. 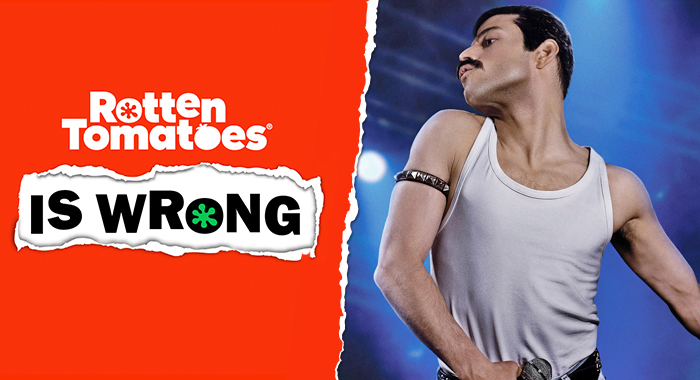 Queen is unquestionably one of the most popular and influential rock bands of the last half century, if not all time, and a biographical film about their formation and the life of its lead singer Freddie Mercury in particular had been in serious development since at least 2010. But fraught with “creative differences” and turmoil behind the scenes, the film that would become Bohemian Rhapsody would take eight years to make. Was it worth the wait?

A lot — and we mean a lot — of people seemed to think so; the film’s impressive 85% Audience Score is proof enough of that. On top of that, though, not only was Bohemian Rhapsody a monumental box office success, racking up over $900 million worldwide, it also took home four Oscars at the 91st Academy Awards, more than any other film, including Alfonso Cuarón’s Roma, Marvel’s Black Panther, and Best Picture winner Green Book. (OK, so it wasn’t the most spectacular field of nominees.)

The critics weren’t quite as enthusiastic as the fans, unfortunately. Bohemian Rhapsody is just Frest at 60% on the Tomatometer, which, on paper, is a bit surprising for the most successful musical biopic ever. The movie won four Oscars, for crying out loud. Where’s the disconnect?

Well, about those Oscars… The one you’re likely to have heard about is the film’s win for Best Film Editing, which a lot of folks found downright puzzling, considering it was widely criticized as one of its most glaring issues and even inspired a video breakdown that went viral. Even John Ottman, the editor who won that award, went on record expressing deep regret about the scene that became the subject of that video.

But that wasn’t entirely Ottman’s fault. The aforementioned turmoil resulted in a new director (Dexter Fletcher) taking charge with only three weeks of filming left, among other things, and in one sense, Ottman deserves some credit for doing what he was able to do with what he was given. The other behind-the-scenes factor was twofold: Brian May and Roger Taylor, the two members of Queen who served as consultants and reportedly ensured the story was so sanitized that, to some, it felt inauthentic or, even worse, inaccurate. They were the reason the original star, Sacha Baron Cohen, who many believed to be pitch-perfect casting, opted to leave the project.

Speaking of which, when all was said and done, Rami Malek managed to acquit himself rather well in the lead, despite what many felt about the potential of Baron Cohen’s take on Freddie Mercury. He was one of the bright spots of the film, and he shone in the masterful climactic Live Aid sequence. For a whole lot of folks, that recreation of the iconic performance alone made Bohemian Rhapsody worth the price of admission.

So who’s right, and who’s wrong? Jacqueline is still recovering from awards season, so this week Mark brings on two guests to help suss it all out: regular RT and Fandango correspondent, pop culture commentator — and part-time rattlesnake wrangler — Nikki Novak; and Tomatometer-approved critic and host of Pay or Wait on YouTube, Sharronda Williams. Sharronda not only believes RT is wrong about Bohemian Rhapsody, but she feels the Tomatometer score is highly disrespectful and can’t comprehend why so many folks have it out for the movie. Nikki, on the other hand, advocates for two scores here: one for the first hour and 53 minutes, and another score for the final 13 minutes, because they feel like two vastly different movies.