"Rotten Tomatoes Is Wrong" About... Morbius

We break down Sony's latest Spidey-adjacent antihero flick to figure out why the audience hit was ravaged by the critics. 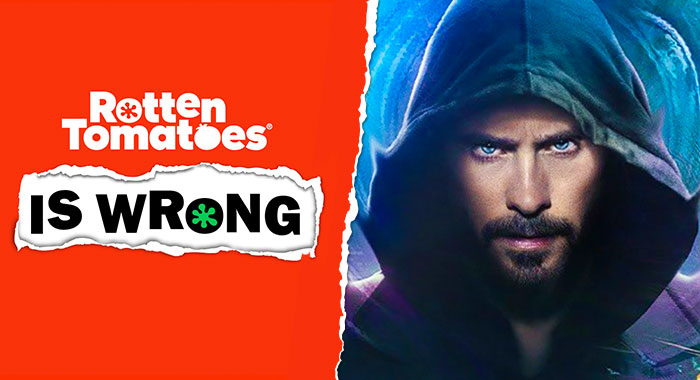 It’s no secret that Sony’s recent run of comic book movies based on characters related to Spider-Man — namely 2018’s Venom and its sequel — failed to impress critics, even as they struck a chord with audiences. So while it wasn’t surprising at all that the studio’s latest entry in the ever-expanding Spidey-adjacent-verse, Morbius, ultimately landed Rotten on the Tomatometer, few likely could have predicted exactly how Rotten it would be. Currently, with 205 reviews counted, Morbius sports a rather dismal 16% Tomatometer score, making it one of the worst-reviewed films to bear the Marvel insignia.

That’s still not worse than 2015’s Fantastic Four (9%), 2005’s Elektra (11%), or even 1986’s Howard the Duck (14%) — remember that little curiosity? — but it’s pretty bad. On the other hand, Morbius boasts a 70% Audience Score, and none of the aforementioned trio even comes close to that. In other words, this is exactly the kind of film our podcast was made for.

When you have a film whose Tomatometer is as low as Morbius’ score, it’s pretty easy to pile on the criticisms. The acting didn’t work, or the story was stale, or the special effects were subpar, or the dialogue was laughable, or the action was dull — these are all things that have been written about the film, albeit phrased in different ways and presented in varying degrees of subtlety. So as the discussion begins, it’s clear where most of the critics stand.

Ask the fans, and while you’re not likely to find too many who think this is some kind of masterpiece, there are plenty who are willing to be more generous to the film. Some enjoyed the horror elements in the story, acknowledging that this felt like a different kind of superhero movie, and that was refreshing. Others had nothing but praise for star Jared Leto’s performance in the title role. And still others felt it was a perfectly entertaining popcorn movie that kept a brisk pace from start to finish.

This week, as Jacqueline is taking some post-awards season downtime to herself, regular co-host Mark Ellis is joined by frequent Rotten Tomatoes correspondent, TV host, lifelong Rotten film fan, and Mark’s go-to burger recommender, Naz Perez. And joining the two of them is estemmed returning guest Coy Jandreau, talk show host, pop culture commentator, comic book obsessive, and creator of the CoyCast Podcast. As it happens, both Naz and Coy believe the Tomatometer is very wrong about Morbius; Coy had a genuinely great time watching the film, even if the post-credits scene brings it down a notch, and Naz thought it was a perfectly fine movie that utilized Jared Leto well, and definitely not an “I need my money back”/walk-out-of-the-theater Rotten film.