"Rotten Tomatoes Is Wrong" About... Uncharted

Are Tom Holland, Mark Wahlberg, and some big action set pieces enough to make this video game adaptation a hidden treasure, or is it hopelessly lost at sea? 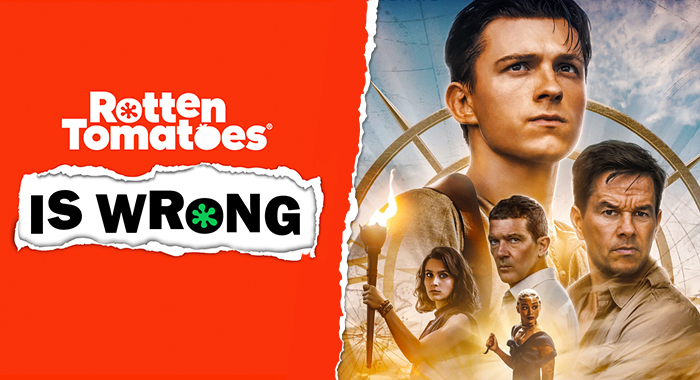 It’s no big secret that, for all the fantastic storytelling and vast, incredible worlds that video games offer, they make notoriously mediocre (or, in some cases, downright awful) films. We didn’t get our first Fresh video game adaptation until 2019, when both The Angry Birds Movie 2 and Pokémon Detective Pikachu broke the curse with 73% and 68% Tomatometer scores, respectively, and three years later, only two other films have managed the feat.

But studios continue to return to video games, hoping to capitalize on the popularity of franchises like World of Warcraft, Assassin’s Creed, and Resident Evil. Well, OK, technically speaking, the latter has become quite the movie franchise, despite the fact critics haven’t been kind. But few have managed to live up to expectations, even with top talent involved and hungry, built-in fanbases.

Enter Uncharted. Based on a series of action-adventure games about an Indiana Jones-like treasure hunter named Nathan Drake and his merry band of cohorts, the film entered into development pretty much right after the first game was released back in late 2007. That’s right: They’ve been trying to make this movie for almost 15 years.

But after plenty of starts, stops, and restarts, multiple personnel changes, and various script re-writes, the film finally made it into theaters earlier this year, with Venom director Ruben Fleischer at the helm and Tom Holland and Mark Wahlberg headlining the cast. Sony finally had what seemed like a solid foundation for a potentially fantastic video game adaptation.

Unfortunately, the final product turned out to be another middling action film that wore its much better influences on its tattered sleeves and felt like an assembly of loose references to its source material. That is, if you asked the critics, who awarded the film a meager 41% on the Tomatometer.

Ask the fans, though, and you’ll get a different story. With an Audience Score of 90%, Uncharted proved to be a winner with moviegoers, who thought the cast, the action, and the fan-service touches were all excellent. It did score the highest opening weekend of the year, after all, until The Batman broke it just a few weeks later.

So who’s right? Joining regular co-hosts Jacqueline Coley and Mark Ellis is someone who knows a little something about video games, Bailey Meyers, Gaming Content Producer at Fandom. She’s a huge fan of the Uncharted 2 in particular, which she considers a landmark game for cinematic storytelling and one of the best video games ever made, period. And as a fan… Bailey actually completely agrees with the Tomatometer score for Uncharted, the film. On the other hand, Mark feels a little more generous, and Jacqueline confesses she had a fantastic time watching it. Who would’ve thought?