"Rotten Tomatoes Is Wrong" About... Fantastic Beasts and Where to Find Them

With The Secrets of Dumbledore in theaters this week, we look back at the first Fantastic Beasts to determine if it's just as charming as its predecessors, or if the magic has fizzled. 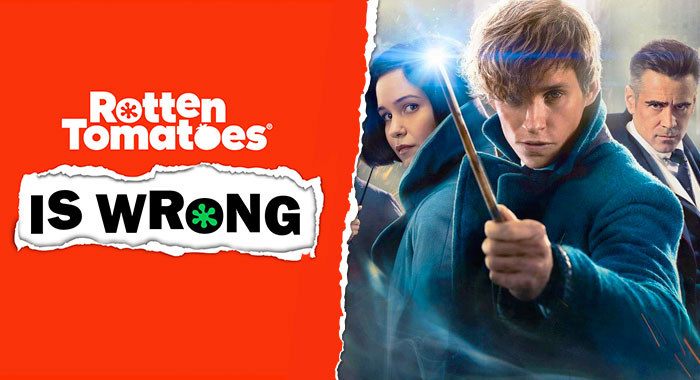 Author J.K. Rowling was living in poverty and studying to become a teacher when she penned Harry Potter and the Philosopher’s Stone in 1997, and there’s no way she could have known the full-blown global sensation her fledgling series of fantasy novels would become. Almost two and a half decades later, not only does the so-called Wizarding World media juggernaut include her insanely popular book series, but also a multi-billion dollar feature film franchise, theme parks around the world, video games, a stage production, and more.

Speaking of the films, if the books themselves hooked millions of fans, the eight Harry Potter movies blew their minds even more, so when the initial franchise came to an end in 2011 with Harry Potter and the Deathly Hallows – Part 2, Warner Bros. was understandably eager to continue expanding the Wizarding World however they could. Their solution was to adapt Rowling’s 2001 companion book Fantastic Beasts & Where to Find Them, originally presented as one of the textbooks that Harry Potter himself and his classmates studied from, and transform it into a prequel series all its own.

The film adaptation Fantastic Beasts and Where to Find Them premiered in 2016 to much fanfare, particularly from the Potter fandom, and it earned solid reviews; it’s Certified Fresh at 74% on the Tomatometer and boasts a 79% Audience Score to match. Led by Oscar-winner Eddie Redmayne as “magizoologist” Newt Scamander, the author of the titular tome, Fantastic Beasts transported the action to 1920s New York City and introduced fans to a host of new characters embroiled in a new magical adventure, and for the most part, people seemed to be on board with it all.

But with the second installment, The Crimes of Grindelwald, earning poor reviews, and this week’s The Secrets of Dumbledore doing marginally better, it made us wonder if the critics were just so eager to dive back into the world of Harry Potter that they were perhaps a bit generous with Where to Find Them. Is the first film a genuinely rousing adventure with likable characters, spectacular visuals, and a rich mythology, or is it merely a blatant attempt by a studio desperate for reliable blockbuster box office to milk one of its most reliable cash cows? Can it be both?

Joining regular co-hosts Jacqueline Coley and Mark Ellis is returning guest Andres “Ace” Cabrera, write for Geeks of Color, co-host of The Meaning Of podcast, and co-founder of YouTube channel First Cut. Like millions of others, he also happens to be an unabashed fan of all things Harry Potter, including the Fantastic Beasts films, and acknowledges that people generally might not be as invested in the new series because, unlike the original Potter movies, they didn’t grow up with them. With that caveat in mind, he thinks the Tomatometer for Where to Find Them feels about right, if a bit lower than he’d like. Mark, on the other hand, thinks the movie misses the mark, even if it’s not outright terrible, and wouldn’t consider it Fresh, while Jacqueline simply thinks the film is terrible.