Is Netflix's throwback horror hit starting to feel a little upside down, or is it still a colorful, thrilling dose of '80s nostalgia?

Stranger Things became a legitimate phenomenon when it premiered on Netflix in 2016, tapping into a wave of ’80s nostalgia that swept through pop culture and continues to this day, even if it now competes with similar throwbacks to the ’90s and even the early 2000s. But now that we’ve had three seasons of the horror series, with a fourth on the way in the very near future, we thought it was a great time to look back on the adventures of Eleven (Millie Bobby Brown), Mike (Finn Wolfhard), Dustin (Gaten Matarazzo), and the rest of the gang to see if the cracks are starting to show.

To be clear, all three seasons are Certified Fresh at 97%, 94%, and 89% on the Tomatometer, with similar high Audience Scores of 96%, 90%, and 86%. That slight downward trend is probably not too surprising, considering how well-received the first season was — it would be difficult for any TV show to beat or maintain scores like that. But there are certainly opinions out there on whether or not that first season even deserved the high praise that it got, and which season might, in fact, be better, and our guest this week is someone who has very strong feelings about all of that. 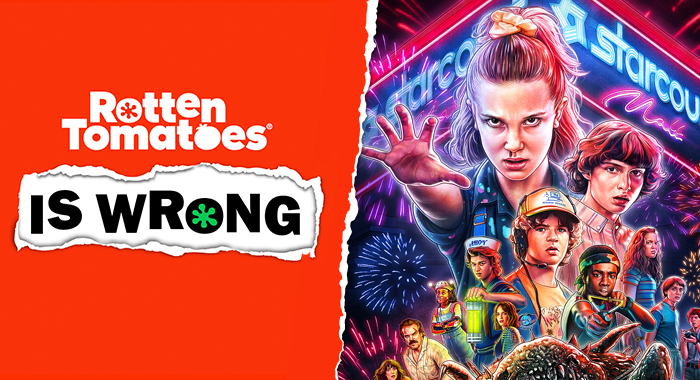 Regular co-hosts Jacqueline Coley and Mark Ellis are joined this week by returning guest Eric Striffler, who hosts Pretty Much It on YouTube and offers pop culture commentary on all of your favorite movies and TV shows. Eric is a fan of Stranger Things, but contrary to what the scores may indicate, he believes the third season is the best by far and makes a strong case for it. Mark loves the first season, but he barely got through the second and didn’t think season 3 was as big of a rebound as he had hoped. Jacqueline, on the other hand, vehemently disagrees with Eric and brings the hate for season 3, but her reason for that may raise some eyebrows. Tune in for the full conversation.