"Rotten Tomatoes Is Wrong" About... The Halloween Franchise

With Halloween Kills tearing up the box office, we look back at the seminal slasher franchise to determine what keeps fans bloodthirsty for more. 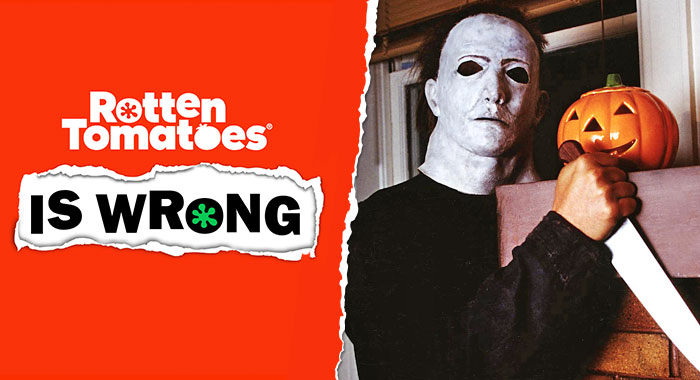 Ever since John Carpenter first unleashed the terror known as Michael Myers on unsuspecting moviegoers in 1978, the pale-masked villain has stalked cineplexes and thrilled audiences… to varying degrees of success. In 2018, director David Gordon Green and co-writer Danny McBride debuted the first of a planned new trilogy, Halloween, to fantastic results, and its second chapter, Halloween Kills, just rocked the weekend box office to the tune of $50 million, despite also streaming on Peacock.

But like any long-running horror franchise, Halloween has had its critical ups and downs — let’s be honest, the downs kind of dominate the series — so what is it about these movies that keeps audiences bloodthirsty for more?

That’s what we set out to uncover on this week’s episode of our podcast Rotten Tomatoes Is Wrong, digging into every sequel, reboot, and sort-of-sequel-sort-of-reboot — as well as a curiously conspicuous detour — to determine if the Tomatometer scores line up with what fans have come to expect of the nigh-unkillable man in the repurposed William Shatner mask and the Final Girl to outlast them all, Jamie Lee Curtis’s Laurie Strode.

Does the Halloween franchise as a whole deserve to be Fresher? (Only two of the entries — the original Halloween and the 2018 film — have met that threshold.) Is Halloween III: Season of the Witch a misunderstood gem that should be judged on its own merits? And what exactly does it take to make an effective horror film anyway?

Joining regular co-hosts Jacqueline Coley and Mark Ellis is a guest who knows a little something about the horror genre: Michael Kennedy, who wrote the Certified Fresh 2020 body-swap horror-comedy Freaky and has a new slasher called Time Cut in the works. Will he be able to successfully argue that Halloween H20 is, in fact, a better film than Halloween 2018?