The Old Henry star waxes nostalgic about the pure, unadulterated pleasures and rockin' soundtrack of the Heath Ledger crowd-pleaser. 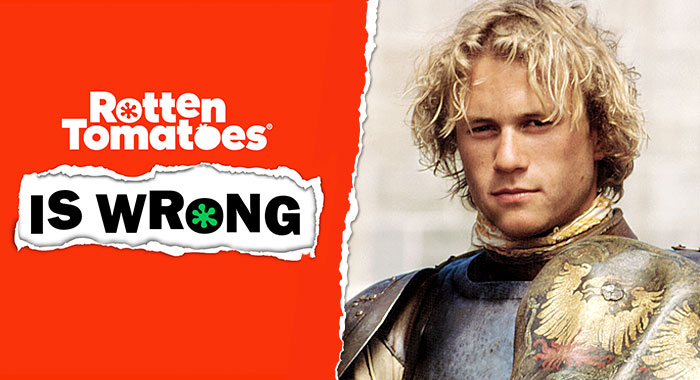 Before he found love on Brokeback Mountain or sowed chaos as the Joker, a rising star named Heath Ledger headlined a breezy, tongue-in-cheek medieval adventure about a lowly squire who  assumes the identity of a noble knight and becomes a master of the joust. Peppered with contemporary references and backed by a soundtrack that included Queen, War, and David Bowie, the purposefully anachronistic A Knight’s Tale didn’t rock the critics quite enough to be Fresh — at 59% on the Tomatometer, it’s just barely Rotten — but it went on to earn a cult following all the same.

Just over 20 years after its initial release, it may finally be time to reassess this feelgood crowd-pleaser. The film, which opened in theaters on May 11, 2001, features a crackling supporting cast that includes perennial fan favorite Alan Tudyk, future Game of Thrones alum Mark Addy, a sparkling Shannyn Sossamon, a gleefully evil Rufus Sewell, and a scene-stealing Paul Bettany as none other than Geoffrey Chaucer himself. It was also written and directed by Brian Helgeland — yes, the same Brian Helgeland who wrote L.A. Confidential, Mystic River, and Man on Fire. Everyone’s entitled to have a little fun at their job once in a while, right?

But the crown jewel of the film is, of course, a young Heath Ledger, whose Hollywood debut came just two years prior to A Knight’s Tale in 1999’s 10 Things I Hate About You, which established his heartthrob bona fides and set him on the path to stardom. As the plucky upstart William Thatcher, Ledger is the perfect mix of sweetness and swagger, not to mention those appropriately dashing good looks, and by sheer force of charisma, he just makes you want to root for him.

So what did 41% of the critics miss here? Some acknowledged the film’s charms but felt they were few and far between. Others claimed that the anachronisms — cute as they were — weren’t particularly clever or inventive, while still others didn’t believe Helgeland and co. went ballsy enough.

This week’s guest has a little something to say about all that. Joining regular co-hosts Jacqueline Coley and Mark Ellis is the venerable Tim Blake Nelson, star of O Brother, Where Art Thou?, Holes, The Incredible Hulk, and more recently, The Ballad of Buster Scruggs and Old Henry, the latter of which is Certified Fresh at 95% and currently available on VOD. Nelson waxes nostalgic about watching A Knight’s Tale repeatedly with his seven-year-old son, describes the “unpretentious, pure, unadulterated fun” that defines the movie, and explains how the film was misunderstood by critics who weren’t willing to judge it on its own terms. As a bonus, he also talks about the kind of man Ledger was (Nelson is friends with Michelle Williams, who had a son with Ledger) and even offers a juicy tidbit about his work on Guillermo del Toro’s upcoming Nightmare Alley.