We're digging up and dusting off a late-'90s favorite beloved for its quick wit, terrifying villain, and charismatic lead in Brendan Fraser. So what did the critics miss? 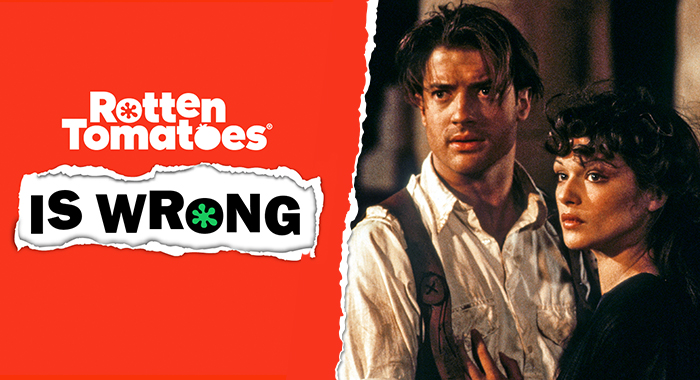 The Brendan Fraser renaissance is well underway and we at Rotten Tomatoes are happy to be living in it. After years in the seeming wilderness, the actor is back in a new season of Doom Patrol now available on HBO Max, had a plum role in Steven Soderbergh’s Certified Fresh heist flick, No Sudden Moves, earlier this year, and will soon be seen in Darren Aronofsky’s The Whale, Brothers (alongside Josh Brolin and Glenn Close), and in Martin Scorsese’s long-anticipated Killers of the Flower Moon.

Fraser’s fans – who include basically anyone who hit a multiplex during his incredible headline run in the 1990s and early 2000s – couldn’t be happier. (Witness the outpouring of support the actor received after the 2018 GQ profile, “What Ever Happened to Brendan Fraser?”, went viral and the world learned of the hardships and injuries he’d suffered during his time as one of Hollywood’s most bankable and ubiquitous leading men.)

Among many flicks in which Fraser has shone throughout the years – Encino Man, George of the Jungle, Airheads, Bedazzled, and even higher-brow fair like Gods and Monsters and Quiet American – it is one film that arguably made him a bona fide superstar and cemented him as a forever-hero for kids who came of age in the 1990s. We’re talking, of course, about The Mummy. (And to a lesser extent, The Mummy Returns… and never ever mentioning that third film ever again.)

With Fraser back on our screens both big and small, we thought we’d revisit director Steven Sommers’ rollicking take on Universal’s classic monster in the latest episode of our podcast Rotten Tomatoes Is Wrong. The film, in which Fraser plays the adventurous Rick O’Connell opposite a plucky newcomer named Rachel Weisz and a memorable Arnold Vosloo as the titular bad guy (abs out, bandage-free), didn’t exactly get buried by critics upon its release. Instead it was dismissed as a bit of fluff. As our own Critics Consensus put it, The Mummy wasn’t “any kind of meaningful cinematic achievement, but it’s undeniably fun to watch.”

Fans have been long quibbled with that kind of brush-off. Unwrap this 1999 blockbuster – and a blockbuster it was, making more that $400 million globally – and you discover a true gem of an adventure film packed with state-of-the-art special effects, a ghoulish and fresh-feeling villain, quick wit, killer pacing, electric chemistry… and absolutely terrifying scarab beetles. And it had, at its center, the singularly charismatic, sexy, and comedically gifted Fraser.

Sure, it’s no Indiana Jones, but for many it felt like at least the next big thing.

So, should the movie have a higher Tomatomter score than its currently just-Fresh 61%? Joining regular Rotten Tomatoes Is Wrong co-hosts Mark Ellis and Jacqueline Coley to discuss just that is Eric Striffler of YouTube’s Pretty Much It, where you can hear him commentating some some of your favorite (and least favorite) films and TV shows. Where does he stand on The Mummy, Fraser, and giant sand faces? Tune in to find out.