"Rotten Tomatoes Is Wrong" About... The Walking Dead

Relive the highs, the lows, and the baseball-bat blows as we debate the long-running phenomenon as it enters its final season. 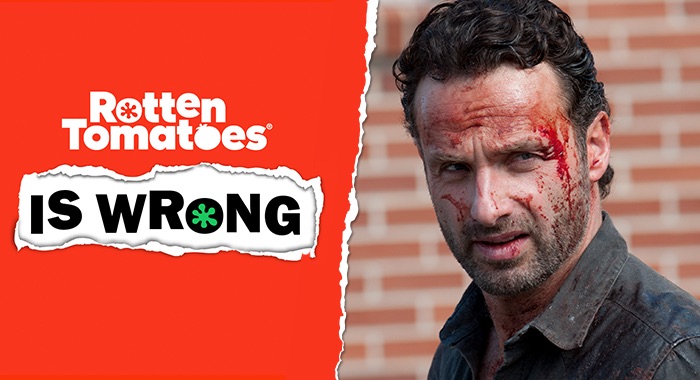 Well, Walking Dead fans, it’s been a journey. A journey that has taken us from the CDC to sprawling farms and on to infested prisons and idyllic-seeming towns and then to Alexandria and beyond. A journey in which we’ve lost some companions we love – don’t even say his name! – and picked up new companions who grew on us… sometimes after, ya know, brutally killing those former loved ones. (Again: don’t even say it!).

It’s also been a journey on the Tomatometer for The Walking Dead. The show, based on the comic book series by Robert Kirkman, Tony Moore, and Charlie Adlard, arrived on the back of critical acclaim, with a Certified Fresh Tomatometer Score of 87% for its first season. It maintained a Certified Fresh streak right up to season 7, when it hit a series low of 64%, with critics tiring of its violence and a plot that felt increasingly like it was merely walking, shuffling even, when it should have been sprinting forward.

Then, the most recent two seasons saw the Dead bounce back, with season 9 earning a series high Tomatometer score of 91% and critics welcoming the energy, and terror, that the arrival of the Whisperers brought. Early word is that the 11th and final season, which debuts this weekend, continues the hot streak.

With the series lumbering towards its conclusion – and exciting new spin-off series and movies (Rick!) on the way – we thought it was the perfect time to look at all that blood-red Tomatometer data, reminisce about the moments that shook us and the characters that moved us (as well as those we couldn’t wait to get chomped), and ask our favorite question: Is Rotten Tomatoes wrong about… The Walking Dead?

Our latest episode of podcast Rotten Tomatoes Is Wrong is an epic one. Joining hosts Jacqueline Coley and Mark Ellis to talk all things Rick and Coral Carl, Negan and Glenn, Daryl and Carol, and beyond is Walking Dead superfan Josh Macuga, founder and host of YouTube’s Good People Association. Will they agree with the critics when it comes to the show’s best and worst seasons? Will they agree with each other about the show’s highs and lows? And did any of them enjoy their time on that farm? Tune in to find out.