"Rotten Tomatoes Is Wrong" About... Thor: The Dark World

Does the sequel deserve its place as the worst-reviewed – though still Fresh – movie in the Marvel Cinematic Universe? 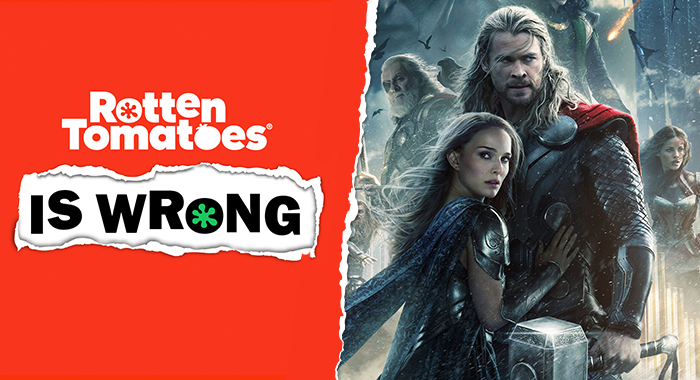 At a just-Fresh 66% on the Tomatometer, Thor: The Dark World is the worst-reviewed movie of the 23 films that so far make up the Marvel Cinematic Universe – but does it deserve that ignominious title? (The Ed Norton-starring Incredible Hulk is the second-worst, FYI, with a 67% Tomatometer score.)

While the 2013 sequel to Thor was greeted with a critical “meh” at the time of its release, and box office receipts were muted – at least compared to most MCU films – there has been a turning of the tide when it comes to Dark World. No one’s quite mustered up the courage to declare evil Dark Elf Malekith a great villain, but the movie’s defenders argue that the chemistry between Thor and Loki, some great set pieces, and awesome visual effects push the film at least to the middle tier of MCU output.

Crucially, the movie’s importance to the development of the MCU that followed – and particularly its significance in Endgame – have prompted a number of writers and commentators to revisit Dark World with Fresh and newly appreciative eyes. But are they right to pick up the hammer and go to bat for Thor’s second solo outing?

That’s what we’re asking in the latest episode of podcast Rotten Tomatoes Is Wrong, in which Mark Ellis is joined by guest co-host and Rotten Tomatoes Editor-in-Chief, Joel Meares, and talk show host, comics expert, and person who knows so much about Dark Elves, Coy Jandreau. Who among them is Team Dark World? And who among them feels this Thor flick should be sent to the fancy gold dungeons of Asgard forever?