"Rotten Tomatoes Is Wrong" About... Cats

Is the critically reviled Cats about to enter the next of its nine lives, reborn as a cult classic worthy of repeat – and, er, influenced – viewings? We're getting jellicle in our latest pod... whatever that means. 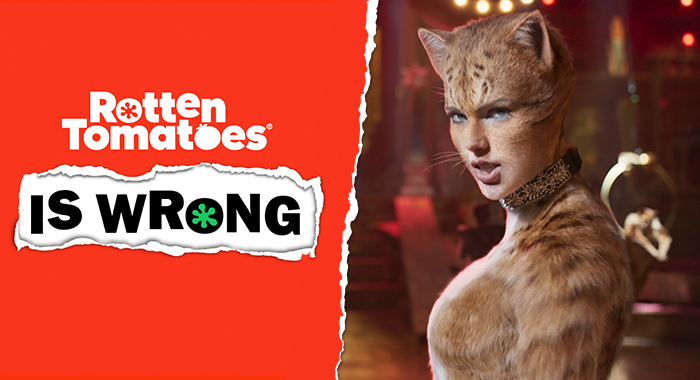 With In the Heights dancing into theaters this week on a wave of incredible reviews – it’s currently Certified Fresh at 97% – we thought we’d cast our minds back to the last big movie musical to hit theaters… one that arrived on a wave of, shall we say, less positive press.

It was late 2019, a lifetime ago it seems, when Universal offered us the Christmas gift of their adaptation of Sir Andrew Lloyd Webber’s Cats, his own adaptation of poems from T.S. Eliot. And for most critics, what lie beneath the heavily-CGI wrapping was a big old lump of coal. Folks who guffawed at the shiver-inducing trailer, with its small and bizarre humanoid cast of famous-faced felines, had their worst fears (or hopes in some cases) confirmed: Cats, the movie, was a disaster.

Scathing reviews drove its Tomatometer score down to a Rotten 19%; the movie would go on to dominate that year’s Razzies.

But lo, in the wake of its release, something “jellicle” started to develop around the movie. (No, we do not know if we are using that term correctly, as we still have no idea what it means let alone if it’s a verb, noun, or otherwise.) The star-studded laughing-stock began to develop a reputation – surprisingly quickly – as something weird, yes, but also wonderful, a film that could become a cult favorite. Midnight screenings started to pop up, the atmosphere akin to late nights with The Rocky Horror Picture Show and The Room; when the pandemic hit, fans turned to online viewing parties at which, powered on by libations and edible treats, they were able to fully make peace and become one with the sights and sounds of a furry Rebel Wilson chomping on dancing cockroaches.

A gloriously messy fever dream? A cult classic in the making? Or just really, really bad? That’s what we’re asking in the latest episode of our podcast, Rotten Tomatoes Is Wrong, and to help our hosts Mark Ellis and Jacqueline Coley paw through it all, we enlisted the big guns: Angie Han, Deputy Entertainment Editor at Mashable, film critic extraordinaire, and yes, one of the 19% of Tomatometer-approved critics who filed a positive review for Cats, a little red tomato she will defend to this day. But can she convince Mark and Jacqueline to love the film that, as she wrote in her review, “had broken me, and I’d never felt happier”?