In this week's Total Recall, we count down the best-reviewed work of the Mr. Holmes star.

TAGGED AS: Best and Worst, Countdown

He’s played Gandalf, Magneto, and Richard III — and this weekend, Sir Ian McKellen adds another household name to the long list of characters he’s brought to life. We’re talking, of course, about Mr. Holmes, director Bill Condon?s adaptation of the Mitch Cullin novel A Slight Trick of the Mind, in which legendary sleuth Sherlock Holmes putters through retirement while looking back on a case that’s dogged him for decades. In anticipation of seeing McKellen as Holmes, we decided to dedicate this week’s list to an appreciation of his fine filmography, including all the expected hits as well as a few surprises. It’s elementary — and it’s time for Total Recall!

A grim, muddy Western with a feminist/revisionist slant, The Ballad of Little Jo finds writer-director Maggie Greenwald plunging viewers into the dirt-caked underbelly of a world in which an unattached woman (Suzy Amis) is liable to find herself kidnapped and sold into slavery before she’s so much as reached the outskirts of the city where her family has cast her out as punishment for having a baby out of wedlock. Unwilling to put up with the brutal treatment that seems to be her new lot in life, Josephine disguises herself in men’s clothing and becomes Little Jo, resident of the misleadingly named Ruby City — and lives undetected for years among a motley crew of thugs and reprobates that includes a violent alcoholic with a taste for ladies of the evening (McKellen). “It’s not hard to view The Ballad of Little Jo as an allegorical critique of sex and power and men’s-club values in America,” mused Stephen Holden for the New York Times. “In its disdain for those values, the film is as focused and cool-headed as the remarkable character whose story it tells.”

He’s chiefly known to a generation of filmgoers as Gandalf and Magneto, but before picking up roles in two of the most successful franchises in recent memory, McKellen could often be seen adding an expert splash of color to British arthouse pictures in supporting roles. Case in point: 1996’s Jack & Sarah, in which Richard E. Grant and Samantha Mathis star, respectively, as a single father grieving the death of his wife and the cute waitress he hires as his nanny. The movie’s superficial resemblance to any of the Hugh Grant rom-coms of the era wasn’t lost on critics, but neither were its many small charms — including McKellen as the friendly neighborhood alcoholic bum that Grant hires for additional domestic support. “Jack & Sarah is one of those romantic movies viewers know will end in a happy smooch,” admitted the San Francisco Chronicle’s Peter Stack. “What’s fine is the rush of amusing, heartrending humanity before it gets to the inevitable.”

8. The Lord of the Rings and The Hobbit Trilogies

Ian McKellen has appeared in dozens of films, television shows, and plays — and he’s still making more — but for a considerable number of filmgoers, he will always be Gandalf from Peter Jackson’s Lord of the Rings and The Hobbit trilogies. And really, if you’re going to distill his life’s work into six films and a single role, that isn’t such a bad place to start. Although these movies definitely had their critical ups and downs, they brought J.R.R. Tolkien’s books to life with an overall artful blend of epic scope and wide-eyed wonder, and while McKellen may have played the noble wizard under layers of robes, hats, and hair, none of it — nor the increasing amounts of CGI spectacle — were enough to dull the depth of his portrayal of a character who could be gentle, imposing, or funny, sometimes all in the space of a single scene. As Bill Muller put it for the Arizona Republic, “Not only has Jackson boldly and faithfully brought J.R.R. Tolkien’s world to life, he’s created the most epic and sweeping fantasy adventure of all time.”

It took Cold Comfort Farm more than a year to make its journey from British television to American theaters, but for the most part, Stateside critics found the movie none the worse for wear; although John Schlesinger’s ensemble-driven adaptation of the Stella Gibbons novel — about an unflappable young woman (Kate Beckinsale) who heads to the country in order to live with relatives while discovering herself as a writer — was a fairly minor commercial success, it resonated strongly with critics who appreciated Schlesinger’s light touch and sterling cast, which included an array of wonderful supporting players that included McKellen, Stephen Fry, Joanna Lumley, and Rufus Sewell. “What could be more welcome,” wondered the Los Angeles Times’ Kevin Thomas, “than a classic English comedy, bristling with wit and hilarity and crammed with wonderful eccentrics?” 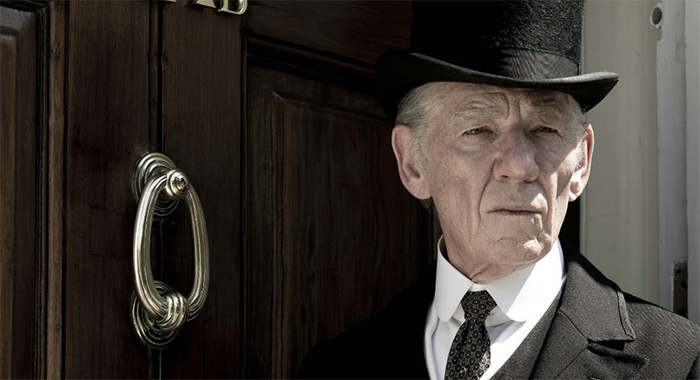 Take the big-budget action thrills of Robert Downey, Jr.’s Sherlock Holmes franchise, spin them 180 degrees, and age the master detective by 50 years or so, and you’ve got the basic outline for Mr. Holmes. Many of Holmes’ screen appearances over the years have focused on solving mysteries and defeating bad guys, but this elegiac adaptation of the Mitch Cullin novel A Slight Trick of the Mind is more interested in the man under the deerstalker hat, and how he confronts his greatest foe — the deleterious effects of advancing age — while leading a quiet beekeeper’s life in retirement and pondering a long-ago case he was never quite able to solve. While Holmes may strike fans of Sherlock’s peppier adventures as stubbornly slow, director Bill Condon’s deliberate pace yields its own rewards; as Bilge Ebiri wrote for Vulture, “It’s a gripping little tale, to be sure, but it’s more than that. Somewhere in its tangle of timelines, false starts, and red herrings is a great truth about the unsolvable mystery of the human soul.”

The original X-Men trilogy isn’t perfect, but there’s no arguing that it helped lay some crucial groundwork for the many superhero movies that followed. One of its strongest components has always been the cast, starting with the 2000 original, which united an impressive ensemble that included the perfectly chosen McKellen and Patrick Stewart as long-battling mutant frenemies Erik “Magneto” Lehnsherr and Charles “Professor X” Xavier. The battle between Xavier’s X-Men and Magneto’s Brotherhood of Evil Mutants fuels the action overlaying the sociopolitical subtext in the original trilogy — and when the franchise rebooted itself with 2011’s X-Men: First Class, taking the characters back to their origins, the Xavier/Lehnsherr friendship frayed before filmgoers’ eyes, with Michael Fassbender and James McAvoy stepping in for McKellen and Stewart. The series’ dual timelines merged for 2014’s X-Men: Days of Future Past, bringing McKellen and Stewart back into the fold while repairing the narrative damage wrought in the widely maligned X-Men 3: The Last Stand — an apparent swan song for both actors in the roles, and one that allowed them to exit on a high note. “X-Men: Days of Future Past is a thrilling, hey-what-if comic-book movie that hits just about every mark you’d reasonably want it to hit,” observed Deadspin’s Will Leitch. “It’s not easy to surprise in a blockbuster these days. It’s a rare treat to find one that even tries.”

The fascinating story of real-life con artist David Hampton formed the basis for Six Degrees of Separation, adapted from the John Guare play about a smooth-talking young man named Paul (Will Smith) who shows up on the doorstep of a wealthy New York couple (Donald Sutherland and Stockard Channing) and convinces them he’s not only friends with their college-age kids, but that he’s the son of Sidney Poitier. Before the night is out, he’s sleeping in their guest room — and before the closing credits roll, the extraordinary truth of Paul’s story is revealed. Bolstered by a deep bench of acting talent — Channing earned an Oscar nomination, and the stars were backed by supporting performances from a group that included McKellen, who makes an amusing appearance as a South African businessman — Separation won praise from critics like the Austin Chronicle’s Marjorie Baumgarten, who wrote, “The temporal experience of watching Six Degrees of Separation is one of absorption and intrigue.”

Scandal delves into one of the more titillating real-life stories in Britain’s history, and the marketing materials for the movie didn’t shy away from the movie’s more salacious elements. But first-time director Michael Caton-Jones had more on his mind than mere prurience when he sought to dramatize the peccadillo between former British Secretary of State for War John Profumo (McKellen) and a teenage call girl (Joanne Whalley) who was being pimped out by a prominent doctor (John Hurt); although the movie has its lighthearted moments, it’s really a fairly sober reconstruction of a fascinating series of events. “What makes this movie so absorbing is its heady celebration of London during this period, as well as a healthy enjoyment of the erotic elements,” wrote Jonathan Rosenbaum for the Chicago Reader, “demonstrating overall that good, trashy fun doesn’t necessarily entail dumbness or irresponsibility.”

Long before they collaborated on Mr. Holmes, McKellen and director Bill Condon offered filmgoers a glimpse into the final days of another public figure — albeit a real-life one — in Gods and Monsters, a thoughtful attempt to imagine what might have led up to the death of Frankenstein director James Whale. McKellen’s performance as Whale drew the lion’s share of Monsters‘ acclaim, although pundits were also impressed with the rest of the cast (including Brendan Fraser and Lynn Redgrave), and fairly stunned by Condon’s evolution from Candyman: Farewell to the Flesh to prestige drama. “Gods and Monsters has been capably made in all regards,” wrote Janet Maslin for the New York Times. “What especially elevates it is the razor-sharp cleverness of Mr. McKellen’s performance, which brings unusual fullness and feeling to a most unusual man.”

Richard III found McKellen collaborating with director Richard Loncraine, collaborating onscreen and off in order to transplant Shakespeare’s play into a fascist nightmare version of 1930s England. The duo’s script took some liberties with the source material, both with the updated setting and its streamlined cast of characters; for example, Robert Downey, Jr. appears as Earl Rivers, an amalgamation of three roles from the play. At the heart of it all, however, McKellen anchored his Richard III with a mesmerizing performance in the title role, ensuring that even if it wasn’t the same story viewers remembered, it remained a gripping exploration of the same timeless themes. “Richard III is the kind of movie that earns the right to interpret the bard’s ideas through alternate perspectives,” argued Cinemaphile’s David Keyes, “because it does so without sacrificing its core values or integrity.”