Do the Oscars Need a Host? Critics Review the 91st Academy Awards Telecast

Critics were split over whether the first host-less ceremony since 1989 needed someone at the helm or not, but they all loved Lady Gaga, Bradley Cooper, and "Shallow." 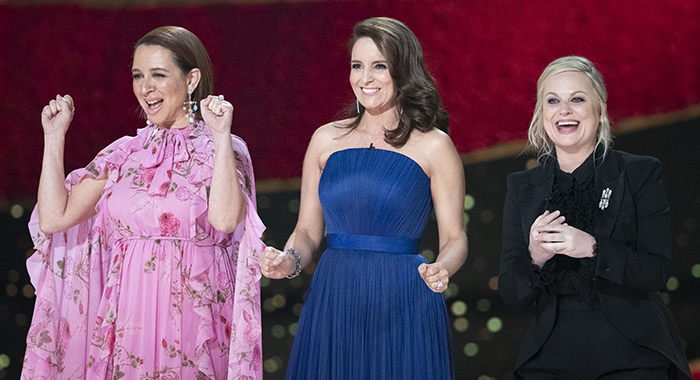 The biggest question leading up to Oscar night wasn’t about the awards themselves. Following several months of indecisiveness that saw a “Popular Film” award announced then rescinded, Kevin Hart stepping down as host amid controversy, the decision not to feature performances of every original song, and the decision to relegate some craft awards to commercial breaks (also rescinded), the question was whether the Academy’s decision to forego a host altogether was smart or not.

Rotten Tomatoes has a rundown of the biggest moments of the ceremony, from Adam Lambert and Queen’s opening performance to Green Book’s Best Picture upset. We’ve also rounded up critics’ reactions to the ceremony itself — the first host-less outing in three decades — to find out whether a host is needed.

As of press time, the 91st Academy Awards ceremony is Fresh at 73% on the Tomatometer, which would put it in the top five Oscar ceremonies of the past decade by Tomatometer (the majority of which are Rotten). Below, read what critics thought about the host-less three hours and 17 minutes.

No Host? No Problem

The majority of critics wrote that going without a host allowed for a tighter ceremony with much less filler.

May the Academy Awards never bother hiring an official host again, because this was the zippiest Oscar Night in years. No stupid montages, no dance sequences, no “give sandwiches to the audience” stunts, no moronic “this is what the magic of the movies means to me” clips, no “let’s ride the subway with Sting” comedy sketches. – Rob Sheffield, Rolling Stone

What is the Oscars without a host? Better. It’s not just about the pacing. Though Lord knows, without the cumulative bloat — the monologue, the ad-libs, the in-the-audience bits, the jokey introductions to presenters who then do their own introductions — the 2019 Oscars were free to trip along at a brisk pace, and ended just 17 minutes past 11 p.m. ET. But beyond lending a rare efficiency to the proceedings, the lack of a host allowed the Academy and ABC — or should I say, forced them — to loosen the vice grip of habit and try some new things. – Kristen Baldwin, Entertainment Weekly

Right from that first, energetic musical performance by Queen and Adam Lambert, this year’s Oscars felt infused by an energy that did not flag throughout the three-hour(ish) event. The evening moved along at a steady clip, unencumbered by dragging comedic bits or jokes that just wouldn’t land. And was it just us, or did the presenters — perhaps because they assumed a greater responsibility for keeping the night on track — seem more committed to their duties than in years past? – Kimberly Roots, TVLine

The ceremony was over in record time because there was no host doing a long monologue or roasting various attendees. There were no cringeworthy bits involving unfunny songs or escapades with “normal” people. The presentations and speeches and performances flowed more or less seamlessly from one to the next. The telecast didn’t serve up as many viral or memorable moments as it might have with a host at the helm, but it was also refreshingly focused on … the movies. Which seems like a real win for everyone involved. – Alissa Wilkinson and Todd VanDerWerff, Vox

A Host Is Necessary

For other critics, the idea of a host-less ceremony was potentially good in theory, but the execution made the ceremony feel like something was missing.

It wasn’t as bad as everyone expected. It was worse. No cohesion, no gravitas, only a scattering of memorable moments, a slew of terrible wins, and a Best Picture winner so ridiculous that Crash suddenly looks like a masterpiece — the Academy Awards made its own case for the ceremony’s irrelevance. The most aggravating reaction an Oscars fan gets when they obsess about the awards year after year is the snarky scoff, “Who cares?” How sad that the show itself is making it harder to answer that question. – Kevin Fallon, The Daily Beast

So what would a probably male, probably comedic host have added by taking up air time and spewing Trump jokes that we’ve all heard before? A thematic through line and entertainment element that this year’s Oscars desperately needed. – Kelly Lawler, USA Today

This was the first Academy Awards not to have a host or hosts since the all-time rock bottom ceremony of the Oscars of 1989 — and it really showed. … With a stage framed with what was either a Game of Thrones set reject or a Jeff Koons interpretation of Donald Trump’s hair, tonight’s bloated Oscars was a live ceremony that certainly lacked form, far too often function. – Dominic Patten, Deadline Hollywood

Yes, hosts can be sloppy, but that also gives the show a personality, and some banter. I like banter! And, apparently, I like my Oscars to be more sloppy than efficient. … It’s more like having some sort of authority figure who comes from the perspective of the audience. If something weird happens, it’s nice to have a host who can pop out and say, “That was weird, right?” Or if someone gets his or her speech cut off, but were in the middle of saying something important, it’s good to have a host who can come out and make sure that person can finish, as Jimmy Kimmel has done in the past. – Mike Ryan, Uproxx

Since so much of the night hinged on winners giving entertaining speeches, some worried that trying the same experiment again would fall flat. There is a kind of paradox at the heart of the Oscars, which is that people don’t really remember the show itself. They remember moments, maybe something the host did, but more often something the winners did  — a spontaneous show of emotion, a turn of phrase. The Academy Awards is a huge, glamorous production that desperately wants to entertain you, but the long-term measure of whether a year was any good has to do with the details, which are mostly unplanned. – Willa Paskin, Slate

Normally, the host is a warm body used as a buffer between the industry and the audience. The absence of a host this year was a reminder that this figure can take up an inordinate amount of space — space that isn’t always used particularly well or efficiently, and certainly space that might be better off given to others. … It felt like the People’s Oscars, even if some of the movies that won revealed serious flaws in the ongoing discussion about how media reflects and propagates broken narratives about race and sexuality. Not every Oscars will have such an unpredictable slate, sure. But doing without a host showed us a different kind of Hollywood: a Hollywood where the audience calls the shots. – Sonia Saraiya, Vanity Fair

Give Maya, Tina, and Amy the Job

One thing everyone agreed on is that the trio of Maya Rudolph, Tina Fey, and Amy Poehler, who delivered the show’s pseudo-monologue, could’ve hosted the whole thing and probably pleased everyone in the process.

It couldn’t have happened without Maya Rudolph, Tina Fey and Amy Poehler, the hosts in all but name. The three amigas kept cracking that they weren’t really the hosts, but they did everything a host is supposed to do, i.e. welcome the crowd, set the comic tone, get out of the way. They crunched a whole night’s worth of host duties into three minutes, running through their gags at Ramones speed. – Rob Sheffield, Rolling Stone

By the end of the evening, I was fully convinced that the Academy should give up on hosts for good. But I reserve the right to change my mind if Tina, Amy and Maya agree to do it next year. – Judy Berman, Time

Producers paired celebrity presenters in incredibly interesting combinations, resulting in both hilarious and touching moments. The lack of a host made the success of those moments that much more important.

John Mulaney and Awkwafina, two of the funniest people in the entertainment industry, commiserating over their first-time Oscar jitters? Divine. Michael B. Jordan and Tessa Thompson, followed by Constance Wu, a vision in yellow on the arm of a glittering Chadwick Boseman? #TrueDetectiveSeason4 vibes. The presenters didn’t waste time with endless stiff, scripted repartee, either. – Judy Berman, Time

While A Star Is Born took home just one award — for Lady Gaga’s original song “Shallow,” of course — its live performance by Gaga and her costar-director Bradley Cooper provided so much chemistry that it exploded into living rooms across the country.

The much-anticipated, heavily hyped “Shallow” performance from Bradley Cooper and Lady Gaga somehow shattered those sky-high expectations. With a brilliant choice to show it in one uncut take, masterful blocking, and a raw yet honed turn from the two stars, the Oscar telecast burst to life and never looked back. – Ben Travers, IndieWire

“Shallow” was the thing the show was building to. All of it. From the moment A Star Is Born premiered this fall, it was an inevitable winner and the inevitable cornerstone to this telecast. There was nowhere for the energy to go after that, and I wonder if the producers gave consideration to pushing it to closer to the end. Shot with theatrical intimacy that verged on uncomfortable — everybody I know was speculating about Gaga and Cooper’s private lives and don’t pretend that you weren’t — “Shallow” was a lovely performance and a reminder of why you need these live musical moments in this show. – Daniel Fienberg, The Hollywood Reporter

A dozen crew members emerged from the wings to place a piano and two microphones on the stage, and the camera swooped to the front row of the theater as Bradley Cooper led his A Star Is Born costar Lady Gaga to the stage. Their soulful duet on subsequent Best Song winner “Shallow” ended on an almost comically tight shot, as the two stars nuzzled each other through the final few bars — an unabashedly intimate moment in front of millions. It gave me chills, thinking of all the memes to come. – Kristen Baldwin, Entertainment Weekly

No matter how critics felt about the hosting decision, they all agreed that the majority of the night’s speeches, which were alternately emotional and funny (and sometimes both), elevated the ceremony.

[Regina King gave] a lovely speech, filled with the sort of graceful humility that, as a cynic, you know is only as good as it is because they’re a great actor, but that, as a fan, you fall for because look how pretty they are in that dress and oh my god I have loved her since Friday. – Bobby Finger, TVGuide.com

There was also the sheer joy when — a minute after having to hold his nose with the Green Book award — Samuel L Jackson got to give best adapted screenplay to BlacKkKlansman‘s writer “Spike LEEEEEEEEEEEEEEE!” – Ben Sutherland, BBC News