Plus, a new Coen brothers film, Ronda Rousey stars in her own biopic, Naruto goes live action, and Freddy Krueger gets rebooted... again.

This week’s Ketchup covers 10 headlines from the last 7 days from the realm of film development news.  Included in the mix are news stories about such movies as Dungeons & Dragons, Kong: Skull Island, My Little Pony, Naruto, A Nightmare on Elm Street, PEZ, Robin Hood: Origins, and the Ronda Rousey biopic.

BAD BOYS 3 AND BAD BOYS 4 BOTH ON THE CASE 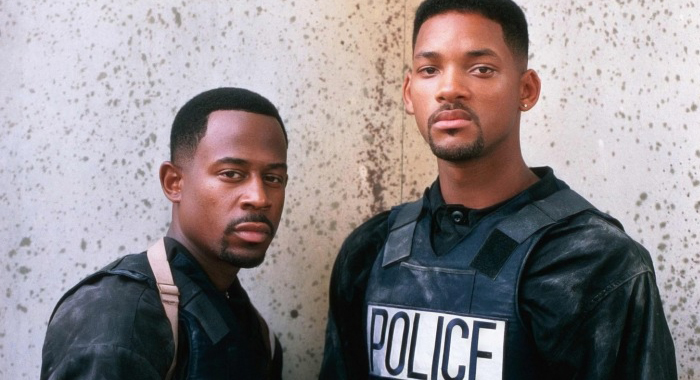 A series of release date announcements this week brought several long-in-development movie projects into the limelight of social media this week. Many of these stories came from Sony Pictures, which announced the release dates of over a dozen movies. That slate included release dates for both Bad Boys 3 (2/17/17) and Bad Boys 4 (7/3/19), with Will Smith and Martin Lawrence expected (but not necessarily confirmed) to return for both “buddy cop” sequels. Curiously, Bad Boys 4 has a much higher profile release date, which suggests that Sony may have bigger plans for the fourth Bad Boys movie than for the third. (Will Smith also made the news this week for replacing Hugh Jackman in Collateral Beauty.) Other sequels that received release dates are Underworld 5 (10/21/16) and Resident Evil 6 (1/27/17) (which Ali Larter is now signed to return for.)  On the remake side, there’s Ghostbusters (7/15/16), The Magnificent Seven (9/23/16), and Jumanji (12/25/16). There’s also the Stephen King adaptation The Dark Tower (1/13/17), Edgar Wright’s Baby Driver (3/17/17), the toy adaptation Barbie (6/2/17), the video game adaptation Uncharted (6/30/17), and Sony’s animated Nativity story The Lamb (12/8/17). Sony wasn’t the only studio to make the news this week for release dates, however, as Warner Bros also made a few big moves, as the Steven Spielberg-directed adaptation of the popular novel Ready Player One is now scheduled for December 15, 2017.  Ben Affleck’s commitments to playing Batman in multiple movies also may have had an impact on scheduling this week, as two of his movies both got moved back by Warner Bros: The Accountant (from 1/29/16 to 10/17/16), and the Affleck-directed Live by Night (from 10/17/16 to sometime in 2017).

The Coen Brothers (Fargo, The Big Lebowski) recently wrapped filming of their “Golden Age of Hollywood” comedy Hail Caesar! for Universal Pictures, and they are already looking at what might be their next film.  To that end, Warner Bros has hired Joel and Ethan Coen to write and possibly direct a crime novel adaptation called Black Money. That novel, by the late Ross McDonald, follows his private eye character Lew Archer: “Hired by a spurned lover to expose the suave Frenchman who has run off with his client’s girlfriend, Archer follows a trail that leads to a deep conspiracy as the mysterious paramour is connected to a seven-year-old suicide and a ton of gambling debts.” The deal is being compared to Inherent Vice, which was another recent example of a classic detective novel being adapted by a modern acclaimed director(s). Universal Pictures has scheduled Hail, Caesar! (which features Josh Brolin, George Clooney, Jonah Hill, Scarlett Johansson, and Channing Tatum) for February 5, 2016.

2. UFC CHAMPION RONDA ROUSEY TO STAR IN HER OWN BIOPIC

As this column at Film School Rejects points out, Hollywood has a somewhat rocky history with people starring in their own biopics. In some cases, the problem is that the famous person in question didn’t necessarily become famous based on their amazing acting abilities, so “acting” as themselves doesn’t work out. There are examples, however, where there are other reasons why the biopic subject really is the best choice to star in the movie.  That might be the logic behind the news this week that UFC Champion Ronda Rousey will star as herself in her own biopic. That movie will be an adaptation of Ronda Rousey’s biography, titled My Fight/Your Fight. Paramount Pictures is the studio that won the rights to Rousey’s book, and Mark Bomback (Live Free or Die Hard) is the writer that the studio has hired to adapt it.  There’s no production start date for Rousey’s biopic yet (there’s also no director signed), but it probably won’t be this year.

The last time that Universal’s giant monster reboot Kong: Skull Island (3/10/17) made the news, it was about the departure of Michael Keaton and J.K. Simmons. This week, we heard about several new names for Kong: Skull Island, including the two actors expected to replace Keaton and Simmons.  We should also first mention that Tom Hiddleston (Marvel’s “Loki”) remains cast as the film’s male lead. Samuel L. Jackson (Marvel’s “Nick Fury”) and John C. Reilly (from Marvel’s Guardians of the Galaxy) are both reportedly in talks (or being eyed) to replace J.K. Simmons and Michael Keaton, respectively. Brie Larson (21 Jump Street, Trainwreck) has also been cast as the film’s female lead, and Tom Wilkinson has been offered one of the ensemble’s lead roles. Corey Hawkins (Straight Outta Compton) has also been cast in a supporting role. Kong: Skull Island will be directed by Jordan Vogt-Roberts (The Kings of Summer) from a script by Max Borenstein (2014’s Godzilla) and John Gatins (Flight, Real Steel).

4. KRISTIN CHENOWETH TO VOICE NEW CHARACTER IN MY LITTLE PONY

It was in last October that we first heard about plans for an animated feature film based on My Little Pony. This week, we heard our first casting news for the feature, which remains scheduled for release in 2017. Broadway and TV star Kristin Chenoweth will provide the voice for a new character who will be introduced in the feature film. It’s unknown if there are also plans for Kristin Chenoweth’s character to do any singing. This news came out of a Lionsgate financial analysts call this week, which included confirmation of their plans for a Monopoly movie (also with Hasbro), and a new Robinson Crusoe movie which might lead to a new film franchise.

Much like  readers of superhero comics once upon a time, fans of Japanese anime and manga still sort of exist in their own little niche of fandom, and even the most popular titles remain mostly unfamiliar to non-fans. And yet, during the late 2000s, the word “Naruto” consistently made year-end “top search results.” Naruto began as a Japanese manga series (in Shonen Jump), and then became even more popular as an anime series, which was then followed by animated feature films, video games, a trading card game, and much more. Now, Lionsgate is “jumping” onto the Naruto bandwagon, with plans for a live action feature film about the continuing adventures of the titular teenage ninja Naruto Uzumaki. The live-action Naruto movie may mark the feature film directorial debut of Michael Gracey, who has formerly worked as the visual effects supervisor on movies like Ned Kelly. That will depend upon whether the P.T. Barnum biopic The Greatest Showman on Earth gets made before or after Naruto receives its greenlight.

Possibly inspired by the success of The Hunger Games, Jeremy Renner as Hawkeye, and DC’s Arrow TV series, there are multiple projects in development in Hollywood based on the legends of Robin Hood and his Merry Men. This includes Disney’s Nottingham & Hood, Sony’s plans for a “Robin Hood cinematic universe” (Friar Tuck, Will Scarlet, etc.), and also a Robin Hood project at Warner Bros. This week, it was Lionsgate that seemed to get an early headstart in the race, as they have already cast their lead. Taron Egerton, the young breakout star of this year’s Kingsman: The Secret Service, is now in talks with Lionsgate to star in Robin Hood: Origins. This movie is being described as a “gritty, revisionist take” and compared to The Dark Knight. Robin Hood: Origins will be the feature film directorial debut of Otto Bathurst, who has worked on TV shows like Peaky Blinders. The lingering question surrounding the question of whether Taron Egerton will be able to sign on for Robin Hood: Origins concerns scheduling, namely if 20th Century Fox will start filming the Kingsman sequel around the same time.

It was over two years ago that we last reported on Warner Bros’ new plans for a Dungeons & Dragons movie (coincidentally, in that same column, we reported about the movie which became this week’s Mission: Impossible – Rogue Nation). However, there was also a lawsuit in the meantime over which company had the rights to make another Dungeons & Dragons movie, and that case is now settled. The result is that Warner Bros can move forward with their planned adaptation, with representatives of both Hasbro and Sweetpea Entertainment (the two parties on either side of the lawsuit) attached as producers. The new Dungeons & Dragons movie is being adapted by screenwriter David Leslie Johnson (Orphan, Red Riding Hood), who is also working on the new Nightmare on Elm Street reboot (see below). Warner Bros is still looking for a director to take on the role of Dungeon Master.

It has only been five years since New Line Cinema attempted to reboot their A Nightmare on Elm Street franchise with a new movie starring Jackie Earle Haley as Freddy Krueger. Although that reboot earned a Rotten score of just 15 percent, its global box office was $115 million, making it the most successful of New Line’s horror reboots globally (and #2 domestically, behind Friday the 13th). However, plans for a sequel to the 2010 movie have not gone anywhere in the last five years. So, New Line Cinema is already making moves for yet another reboot to their Nightmare on Elm Street horror franchise, which will be the 10th film in the franchise. New Line Cinema has hired screenwriter David Leslie Johnson (Orphan, Red Riding Hood), who is also working on the Dungeons & Dragons movie (see above), to work on rebooting Freddy Krueger. This isn’t the first time, however, that a relatively recently rebooted horror franchise was put into development for a second reboot. The same is also being done currently for second reboots of the Friday the 13th, Halloween, and Texas Chainsaw Massacre franchises.

For people who have been playing with LEGO sets most of their lives, or playing the various video games, the reasons why The LEGO Movie worked might be apparent. To Hollywood insiders, a different lesson may have been communicated, which is that “non narrative” toys and games can be adapted into very successful movies. In the last 18 months, plenty of such projects have been put into development, including Emoji, Play-Doh, Hello Kitty, and Minecraft. This week, Envision Media Arts (Celeste & Jesse Forever) signed a deal with PEZ Candy Inc. to develop an animated feature film based upon the company’s signature candy line.  First introduced in Austria in 1927, PEZ is best known for their licensed dispensers featuring hundreds of characters from movies (Star Wars, The Wizard of Oz), cartoons (both Looney Tunes and Disney), and comic books (both DC and Marvel).  Envision Media Arts has hired screenwriter Cameron Fay, who is also currently working on a new Three Stooges sequel, to figure out how to turn PEZ dispensers into an actual movie with characters, and dialogue, and story.