War of the Worlds Might Be Steven Spielberg's Most Terrifying Film

To celebrate its 15th anniversary, we look back at how the sci-fi thriller fits in Spielberg's filmography and what made it so effective.

H.G. Wells’ serialized novel The War of the Worlds was first published in the late 19th century, telling the story of a Martian invasion and attempted extermination of our planet after the English writer had already delivered The Time Machine, The Invisible Man, and The Island of Dr. Moreau. Wells’ works have been adapted several times in several different formats over the last 90 years, but never as memorably or successfully as the repeated attempts to breathe life into this timeless allegory. There was Orson Welles’ infamous 1938 radio broadcast, which panicked a nation and later inspired the backstory for Buckaroo Banzai, and Byron Haskin’s 1953 film is considered one of the seminal science-fiction films of its era. But in 2005, Steven Spielberg re-teamed with his Minority Report star Tom Cruise to offer a modern take on War of the Worlds, one that represented the culmination of the director’s shift away from the idealist who once encouraged his audiences to watch the skies. On its 15th anniversary, we look back at what made War of the Worlds so effective, how it fits in Spielberg’s filmography, and why it might actually be his most terrifying film. 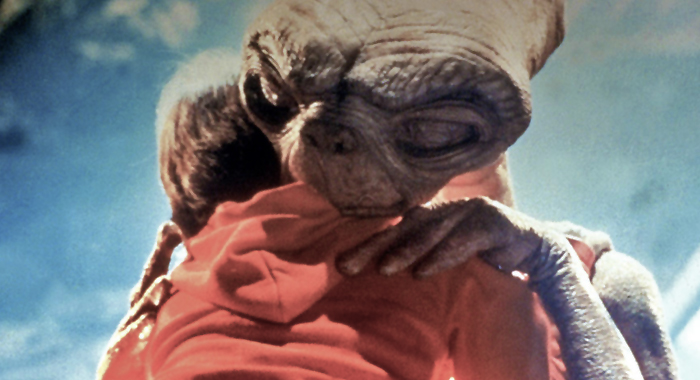 As early as 1964, when a 17-year-old Spielberg made a $500, 140-minute film called Firelight, his view towards the night skies (as well as life in general) represented more of a hopeful outlook than a cynical one. (He once questioned the screenplay of Used Cars for suggesting that politicians were in it just for the grift.) 1977’s Close Encounters of the Third Kind isn’t exactly a glowing endorsement of fatherhood, but it ultimately concludes on an optimistic note, and in 1982’s beloved E.T., the greatest threat comes not from space or its alien visitor, but from humanity itself.

Spielberg really began to embrace the darker elements of science fiction first in 1993’s Jurassic Park and its immediate sequel, both cautionary tales of human arrogance, and then in Stanley Kubrick’s long-gestating A.I.: Artificial Intelligence, which he took over upon Kubrick’s death. In the latter film, David the robot undergoes a harrowing journey in his search to become human that culminates in a touching but melancholy scene set after the extinction of humanity. Spielberg’s follow-up the very next year, the Philip K. Dick adaptation Minority Report, then presented a world in which literal thought police are in charge and abusing their power in Washington D.C. Still, all of those films feel like a prelude to War of the Worlds, which drops all pretense, pulls out all the stops, and delivers a pulse-pounding survival thriller set into motion by the arrival of a deadly, relentless enemy from the skies. Gone are the days of Close Encounters’ musical tones of peace and the healing power of E.T.’s glowing finger, replaced by darker themes inspired by real life events. 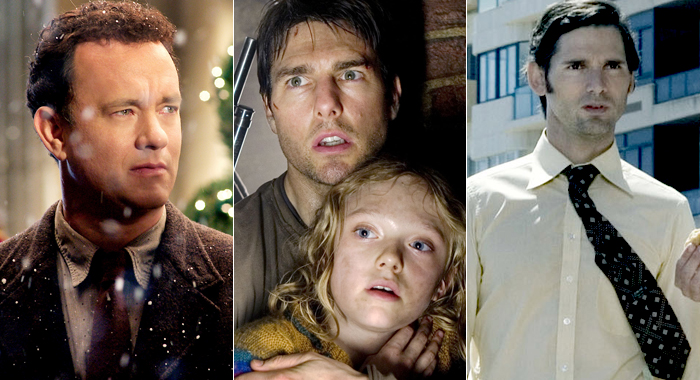 While Spielberg never formally gave them a name the way fellow directors like John Carpenter (The Thing, Prince of Darkness, In the Mouth of Madness = The Apocalypse Trilogy) or Oliver Stone (Platoon, Born on the Fourth of July, Heaven & Earth = The Vietnam Trilogy) did with their own work, his three films from 2004 and 2005 trade in common themes and fears stemming from the attacks on US landmarks on September 11, 2001. The Terminal from 2004 is often dismissed as a whimsical Capra-esque vehicle for Tom Hanks, but it’s also a fable about the trepidation of outsiders entering our country. Stanley Tucci’s customs director even attempts to make Hanks’ trapped immigrant admit that he is afraid of his home country in exchange for passage to ours. At the end of 2005, Spielberg directly tackled the terrorist attack at the 1972 Olympics in Munich. That film’s government-sponsored revenge unit epitomizes the never-ending violence-begets-violence message, justifying its supposed righteousness with misinformation, and Spielberg ends the film with the less than subtle final image of the still-standing twin towers of the World Trade Center.

In between The Terminal and Munich came War of the Worlds, which might not seem at first glance to be an obvious thematic fit, despite its heavily allegorical source material. But when Dakota Fanning’s young Rachel asks “Is it the terrorists?” as she ducks for cover in the back of a van and her brother Robbie (Justin Chatwin) echoes the question moments later, it draws a straight line to the events of 9/11, and the references don’t stop there. The alien enemy of the film emerges with weapons buried within Earth itself, like a terrorist cell waiting in hiding for the moment to strike. As Tom Cruise’s Ray seeks shelter for himself and his kids at his ex-wife’s home, a passenger plane comes crashing down into the neighborhood. Spielberg isn’t dabbling in shameless exploitation, though; he never asks us to marvel at the special effects or “ooh” and “ahh” as buildings are leveled the way we whooped and guffawed through Independence Day. When Ray returns home after the initial attack, the realization that the ash on his face belongs to the disintegrated people he ran through pulls him out of shock into a moment of panic, and it’s equally terrifying for the audience, for both its literal and figurative significance. 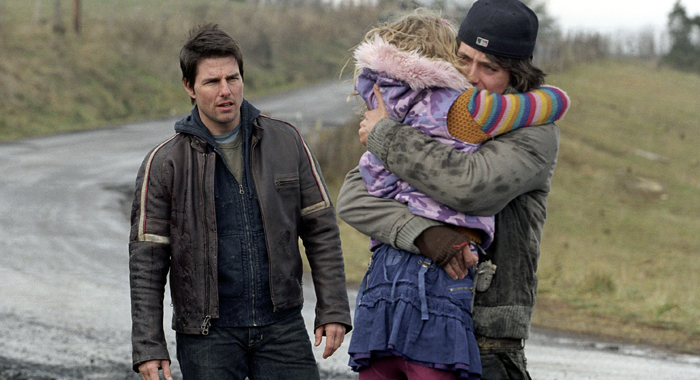 Spielberg’s relationship with his own parents — particularly his father — is well documented in his filmography and further fleshed out in Susan Lacy’s 2017 HBO documentary. Understandably, in War of the Worlds, Cruise’s Ray is not exactly the father figure his estranged children need in their time of distress. At the beginning of the film, he’s a divorced deadbeat dad who doesn’t know what to do with the limited time he gets with his kids when they arrive for the weekend, leaving Rachel to order her own food and watch TV while he sleeps; Robbie, who insists on calling Ray by his first name out of spite, seizes the opportunity to take his dad’s car out for a spin. When they make their daring escape from the city later, Ray also appears to be unaware of his daughter’s claustrophobia or her peanut butter allergy. “Father of the Year” material he is not, but he’s the only hope his children have for salvation.

Meanwhile, their fellow humans begin to grow desperate, turning on one another in the tradition of everything from Night of the Living Dead to The Mist. The darker religious connotations of the latter have a more pointed role in 1953’s The War of the Worlds. One priest is martyred early in the film for attempting communication with the Martians, but when they attack the church where a group of survivors have gathered to sing and pray during the film’s climax, they meet their downfall, as if by divine intervention. By contrast, in Spielberg’s version, a church is the first major building to suffer destruction from the enemy as they emerge from underground. God is pushed out of the way right at the onset, resulting in one less reason for the helpless to look to the sky.

This may be a controversial claim, given that Steven Spielberg is responsible for two of the all-time most popular terror rides (Jaws and Jurassic Park) and at least an assist on a third (Poltergeist, which he produced and co-wrote), but it’s certainly worthy of debate. He drops us in the water and then traps us on the Orca in Jaws — never let anyone tell you this is not a horror film — but the whole affair is splashed with a great deal of adventure. Jurassic Park’s velociraptors, dilophosauruses, and T-Rex can hunt and chase you down both out in the open and in a kitchen, but the experience is also filled with the benign wonder of the first dino sighting, along with a sick triceratops and a sneezy brachiosaurus.

War of the Worlds has no iconic John Williams theme that you can play over a loudspeaker and feel a sense of euphoric warmth; the music is as eerie and menacing as the aliens’ call-to-arms (a seven-trumpets-like signal that would later be repurposed for humor in Popstar: Never Stop Never Stopping). Spielberg never lets his foot off the gas, even when Ray and his kids are only walking or hiding. Moments that feel appropriated from his earlier works find fresh life here, most notably the cat-and-mouse game played with an alien tentacle in a basement that recalls the kitchen scene from Jurassic Park as well as the mechanical spiders in Minority Report. There’s even a subtle nod to Spielberg’s Poltergeist screenplay when Ray reassures Rachel that lightning never strikes in the same place twice.

In between, Spielberg dreams up new nightmares, from a dead body floating in a stream that’s soon followed by hundreds more to a flaming train that blazes past Ray and the kids as they make their way to a ferry with a massive crowd of fellow refugees. The ill-fated ferry ride itself is a horrifying set-piece well beyond the nightmares of Sheriff Brody, Jaws’ heroic lawman, who also never had to decide whether to save his kids by killing Mayor Vaughn, whose crimes against humanity were far greater than just making too much noise, like Tim Robbins’ Harlan. The throwaway moment of a blood bank announcing that they “have more blood than we can use” is alternately ominous and reassuring, but paired with the sight of an alien tripod harvesting a human being and spewing their blood across the landscape, it offers little comfort. There is nowhere to run, nowhere to hide. 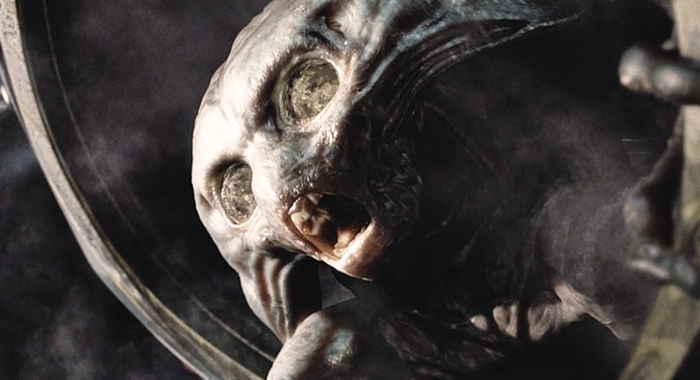 War of the Worlds is usually not regarded with the same deference as Spielberg’s other timeless blockbusters, but it may surprise some to learn that it is still Tom Cruise’s highest-grossing domestic film with over $234 million at the box office. The ending remains a point of contention for critics of the film, and some still can’t forgive the climactic resurrection of one character. But like many films, its reputation has changed with the times, and the one we are living through now, on the film’s 15th anniversary, is its own reflective nightmare. Today, a mass gathering of sardine-packed crowds is a bad omen, but H.G. Wells himself indirectly predicted what it might take for us to come to our senses, and Spielberg’s film expands on the notion.

The die is cast early with Rachel’s splinter; Ray warns her it will get infected if he does not remove it, but she calmly states that “when it’s ready, my body will just push it out.” As the film ends and Morgan Freeman’s voice is heard explaining its ultimate deus ex machina, we are left with these words: “From the moment the invaders arrived, breathed our air, ate, and drank, they were doomed. They were undone, destroyed, after all of man’s weapons and devices had failed, by the tiniest creatures that God, in His wisdom, put upon this Earth. By the toll of a billion deaths, man had earned his immunity, his right to survive among this planet’s infinite organisms. And that right is ours against all challenges, for neither do men live, nor die, in vain.” The mere thought that the tables have turned, that we ourselves could now be the ones undone by God’s “tiniest creatures,” is scarier than any shark or any dinosaur, and it’s a stark reminder of how prescient the best science fiction can be. 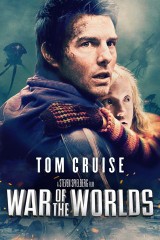